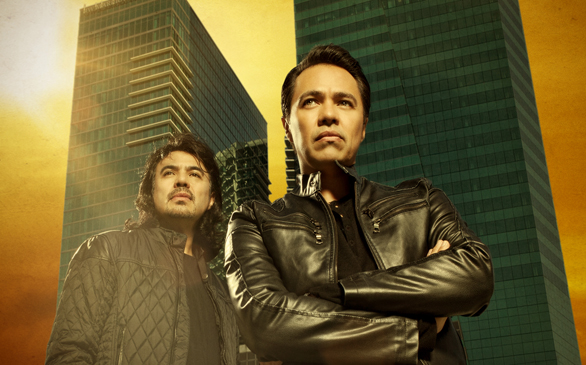 Due everywhere on Oct. 16, the album is yet another offering from the romantic repertoire that Los Temerarios began in the late 1970s. After more than 30 million albums sold worldwide, they’ve dedicated three decades to the Mexican genres of balada, cumbia and ranchera. They continue to deliver that in Mi Vida Sin Ti (My Life Without You).

“This album is the most versatile we’ve recorded throughout our career,” said Gustavo, who does vocals, guitar and writes tunes for Los Temerarios. “It’s versatile because it brings a little bit of everything; we’ve never done such album. You can perhaps call it a strange mixture since it has ballads of pop and more commercial tracks like we used to do in the past.”

Gustavo added that other genres included on the disc are boleros and even the modern rhythmic melodies in Spanish.

With regards to its evolution in writing tunes, Adolfo commented that the group – winners of numerous Latin Billboard awards – has accomplished that en route to delivering relative work to their audience.

“We believe we’ve done well, and we hope the public thinks the same,” said Adolfo, who plays the keyboard and serves as a songwriter. "We’ve always been open to trying new things for our fans that support us.”

The latest work of Los Temerarios, who are from the state of Zacatecas, also features a song by the same name, “Mi Vida Sin Ti.” It sports romantic lyrics with pop-ballad sounds, and they believe it is a piece that many can relate to since it deals with the absence of a loved one.

Once Los Temerarios finishes its U.S. tour, they will head to their native México, neighboring Central American countries and South America for more concerts.