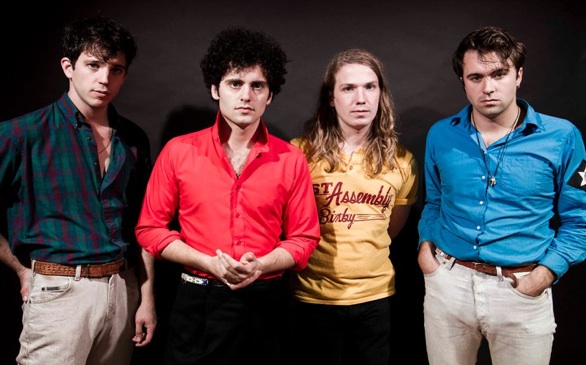 The Vaccines devliver an album that exposes the group's rite of passage.
(Credit: Roger Sargent via Facebook.com/thevaccines)

The Vaccines are the new darlings of brit-pop. With their new release, The Vaccines Come of Age, the London based quartet is taking off where The Libertines left off. What does that mean? It means they are damn good!

The Vaccines Come of Age brings you a collection of 11 glowing tacks that spit out lyrics of raw teenage angst sprinkled with black comedy, exposing the groups personal right of passage.

As is to be expected with a young band in its shaping stages, this work charters into new waters. However, one thing that can be said of this album: there’s nothing forced or awkward. The sound is an honest rendition of a long and complex 18 months of life.

For example, in “Bad Mood” is a tight mush-inducer that takes a split second before drilling itself deep into your mind and taking root. They are hard, yet melodic -- tragic yet endearing. In the track “No Hope” the lead singer Justin Young croons: “Coming of age, I think it’s a problem…I hope it’s just a phase I’ll outgrow.”

In “Teenage Icon,” Young sings: “I’m not magnetic or mythical/ I’m suburban and typical.”  Here they touch personal matters rather than chasing after long-legged beauties.

This record honestly blows my mind; there’s no way you can deny band’s increasingly skilful way around a melody. “Aftershave Ocean” and “All In Vain” are killer! They are poppy, yet bittersweet. Meanwhile, “Weirdo” is a recluse tune that’s somewhat grungy and slows the down the pace, exposing the band’s versatility.

The entire album pays homage to all the feelings of inadequacy and confusion that coming of age brings. It doesn’t sacrificing great hooks, robust baselines and ragged guitar strumming, and it will turn any place into a manic mosh pit.

The record isn’t the best of the best, but it is proof that great music is yet to come from The Vaccines. They may not be superstars, but their raw energy and sincerity will get them there eventually. After all, as Young said: “Great records are not perfect - they're human.”