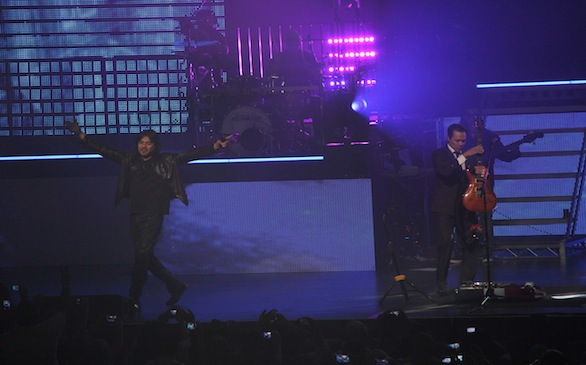 I never thought this would happen, but it did.

I grew up listening to the songs of Los Temerarios, a Mexican romantic music group, while I lived in my native Central American nation of Guatemala. Watching them perform in Los Angeles Saturday night at Nokia Theatre L.A. Live caused much emotion and nostalgia within me.

It proved to be a wonderful night from beginning to end, particularly for the original display in the group’s plan to satisfy their L.A. fans.

Brothers Adolfo and Gustavo Ángel – both co-founders and leaders – appeared on stage with enormous excitement with luminous smiles on their faces while waving hello to the audience.

Tracks such as “Mi Vida Eres Tu” (You Are My Life), “Si Tu Te Vas” (If You Leave) and “Comer A Besos” (Eat You With Kisses) stole the crowd’s heart, mind and soul. They gave samples of their modern pop, romantic ballads and ranchera blends as they ignited happiness, memories and nostalgia for the public.

Over the years, Los Temerarios have indeed evolved their writing style within their respective tunes. Adolfo, who has admitted it, tends to write and compose pieces for particular women he’s falling in love with. That’s where the passion begins, I suppose, but each of their group’s songs are very special. Each holds a different and meaningful message.

Los Temerarios have enjoyed an undeniably successful career, having been together for over 30 years and selling over 30 million albums. They have a new album, titled Mi Vida Sin Ti (My Life Without You), releasing everywhere Oct. 16.

They performed some of the tracks from that production, including “Mi Vida Sin Ti.” The crowd loved it since it’s a catchy romantic tune that’s being played a lot throughout the radio and Internet music waves.

While at the show, I recalled several instances and moments of my life as a kid. Los Temerarios sure do know how to instill that and much more, musically.