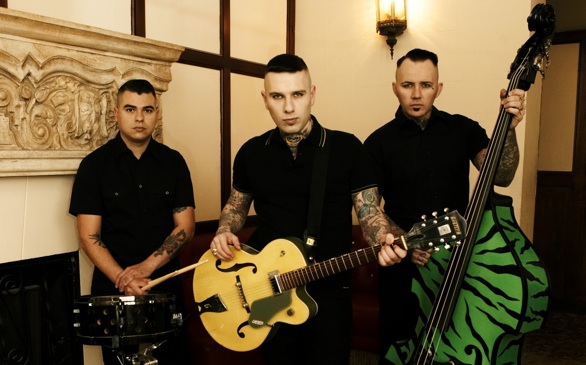 Back in 1995, Nick 13 and crew took the psychobilly sound and made it their own as the band Tiger Army. Fast forward to 2012, and the band continues to make material that brings together fans of all ages and genre preferences.

Many of those Tiger Army lovers will thrash it out in the pit at one of the many shows in this year's Octoberflame V. Bringing both emerging and established acts along, the band will tour California and Arizona in the quest to give concert-goers an experience to remember, starting with its show at the Fonda Theatre on Oct. 26.

Bandleader, and now also solo artist, Nick 13 looks back on the last time the band came to L.A, and expresses nothing but excitement for the upcoming show.

"It's been a while since we actually played in Hollywood and we've had some of our best shows here over the years," he said. "I'm looking forward to it and we're hard at work and getting everything together and I think it's going to be a good time."

In fact, Nick 13 wants attendees to take away more than a simply temporary good time. For him, the concert means so much more than holding the audience's attention with gimmicks for a couple of hours. He recognizes fans over the decades might see the band twice numerous times so each show should bring them back for more than a rehearsed routine.

"It always relates to the spontaneous moments. That's always been a thing for me," he said. "In terms of playing live, there are certain artists that are really more like acts where you can go see it once, and it seems really amazing. And then when you see it a second time you realize how much artifice is involved in the show. Moments that seem spontaneous, you realize, are rehearsed."

That feeds into the way that Nick 13 oversees the structure of the band's performance.

"I've always felt that stuff like this is ultimately a disservice to what I'm trying to do artistically and to the audience as well," he said. "I like to let the music speak for itself instead of relying on tricks or gimmicks."

The band’s music itself stands on its own. From album to album, the sound undergoes subtle changes, but the emotional intensity stays the same. Each track feels honest, each melody placed with ease. Looking at the band’s recordings and live shows as simply psychobilly limits the band; Nick 13 noticed that although psychobilly stands as a subculture, the audience doesn’t exist as one standard, homogenous bunch.

“While I do consider Tiger Army a psychobilly band, we've always drawn on a lot of influences musically, and I think that's always been reflected in the crowds,” he said. “You see a lot of diversity as far as where people are coming from music-wise. It’s cool for me to see who's there when we play."

Speaking of influences, Nick 13 embarked on his own solo career, which took inspiration from very different musical genres. After working on his own independent material, he sees a new energy coming to his interaction with Tiger Army.

“I spent many, many years on the road, basically not really having a life outside of Tiger Army,” he said. “It’s always been my creative vision so its not like I had to do anything I didn’t want to do. But exploring Americana and country music the way I have in my solo work and having some time to do different things away from Tiger Army makes me appreciate it that much more when I come back to it, because I am getting something from it I don’t get anywhere else.”

Part of that lies in the fact that the band really thinks about each show. If your friend goes to one Octoberflame V concert and you go to another night, chances are your set lists won’t match up. Even returning to L.A., Nick 13 stresses that the Pomona show won’t echo the Hollywood show - all the more fun for concertgoers who remember seeing the band back in the ‘90s.

For newbies to the Tiger Army sound, this month proves the right time to get a little more psychobilly.

Tiger Army will perform at The Fonda Theater on Oct. 26.