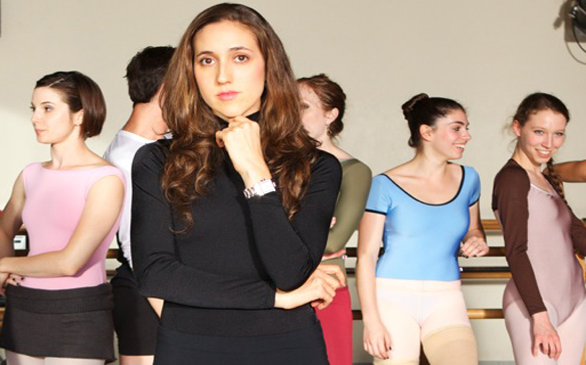 Once in a while, there comes a time when the talented become more talented, particularly for their visions.

Melissa Barak is on pace to capture another accomplishment. Barak has been patiently, but strategically seeking that entrepreneurial persona – one that will help during the process of formulating her latest project: Barak Ballet.

"My vision is not to create the classics. I am not looking to re-hash the past," she said. "In a diverse, creative city like Los Angeles, I want to bring out the entertainment tendencies of the people. As a Los Angeles native, born and raised, I feel like I have a real pulse on what people find exciting about entertainment and what they want to see out of ballet and dance."

Barak, a beautiful 33-year-old ballerina and choreographer, became aware of ballet since her childhood. While growing up in L.A., she attended live performances. That’s where her passion and love for this particular art form evolved.

"I was glued to what I saw," Barak said. "...Since I was little, I knew that that was my passion. It's something that I've loved doing and believed in. It gave me that sense of purpose."

So glued that she stuck with it through her teens and young adult life. And it’s been rewarding for her.

"There's a personal fulfillment when dancing to music," Barak said. She mentioned that the feeling of both acting and dancing on stage has brought her a sense of personal expression.

"Living that precious moment every day is a very fulfilling and joyful experience," she added.

Over the years, she’s had dancing roles in numerous acclaimed ballets, performed as a principal dancer and constructed routines as a choreographer. Her career includes stints at Los Angeles Ballet, New York City Ballet and Morphoses/The Wheeldon Company.

Now, the concept of Barak Ballet is not too far away. Barak, however, did acknowledge some of the factors that can either facilitate or delay her vision.

"It's up to the community to get behind this project. It's up to dance lovers that have the financial capacity that want to help this come to reality,” she said. “That's what it really depends on."

Barak Ballet, nevertheless, appears to be on the right track with its early commitment to holding fundraisers. The Barak Ballet Seaside Event, Nov. 10 in Pacific Palisades, is the next event promoting Barak’s ongoing plan, and it will feature hors d'oeuvres, cocktails and live musical entertainment, among other things.

Barak’s vision highlights an almost completely different set of ballet themes, which could turn out to be effective and efficient.

"Doing new works with that fresh energy and a new approach that's more modern and more relevant today...that's what makes sense to me," she said.

She added, "It's basically taking ballet and bringing it to the 21st century and giving it that fresh, new energy that I think ballet in general kind of needs right now."