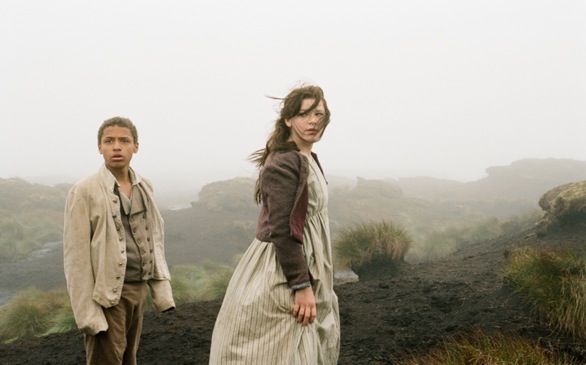 Wuthering Heights is a new adaptation of the black and white classic.
(Credit: Agatha Nitecka)

Adaptations of 19th century novels range from the wonderful (BBC’s TV mini-series “Pride and Prejudice”) and weirdly ingenious (“Clueless”) to forgettable (Heath Ledger as Casanova) and simply deplorable (MTV’s “Wuthering Heights,” which was of course set in a California high school).

It just so happens that Andrea Arnold saw a finer version of the latter as a kid, with Laurence Olivier as Heathcliff and Merle Oberon as Cathy in the black-and-white 1939 Hollywood classic. Now she has made her own adaptation of this cherished black-and-white Emily Brontë masterpiece.

Throughout her busy career, Arnold has become one of Britain’s treasured filmmakers. She won two Jury Prize awards at the Cannes International Film Festival for Red Road and Fish Tank and the Academy Award for Best Live Action Short in 2005 for Wasp.

“I have never liked the idea of adaptations,” Arnold said. “A book is such a different language from film and they are often complete as they are, so I have really surprised myself by attempting this one. And what a book to pick.”

And boy is she right. Brontë’s only novel is a perennial resident of the English literary canon, precociously approaching the themes of class, gender and human nature at the time of its publication. Here, the 1847 gothic receives a visceral, gritty treatment from Arnold, resulting in a refreshing take that detaches it from previous adaptations.

The film begins with an adult Heathcliff (James Howson makes his impressive acting debut) recollecting his first childhood encounter with young Cathy (Shannon Beer) at the old farmhouse of the Heights. The development of their relationship then proceeds to take up most of the film.

Among many factors that make Arnold’s film unique, this is also the first time that Heathcliff is portrayed by black actors (Solomon Glave plays the young protagonist).

The director said, “I tried hard to honour what I personally interpreted in the book. Heathcliff’s difference and strangeness and how young everyone was.” The effect then takes shape as an absorbing tale about an ultimate outsider as much as it is a tragic romance.

Of all the adjectives that can describe Arnold’s Wuthering Heights, “melodramatic” isn’t one of them. In fact, she created a film that was as bare as possible.

Foregoing a musical score, she said, “I wanted to hear everything: the animals, the wind, the kicking, the slapping, the whipping, the yelping, the screams, the crying, the pain.”

In fact, we hear more from the work of French sound designer Nicolas Becker than actual dialogue from the actors. And it works. Every whip that Heathcliff receives from Hindley becomes harrowing, as do the poignant scenes of death.

In the end, Arnold plays a deft hand in making the film as authentic as possible, not only through sound and setting, but through casting as well. Among Glave, Beer and Howson, she hired an all amateur-cast for the farmhouse and professional actors for the more affluent Grange.

Arnold revealed, “I wanted the Heights to be raw and untamed and elemental and masculine and the Grange to feel mannered and more feminine and careful.”

Complemented by the cinematic brilliance in which Arnold captures everything, the result is a beautiful, requisite modern adaptation that stays faithful to one of literature’s most beloved works.