Latinos Turn Out for Paranormal Activity 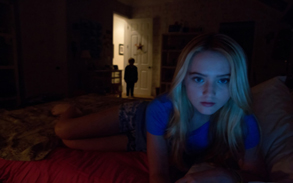 Paramount Pictures' wildly successful horror movie franchise Paranormal Activity gets a fourth supernatural spin this weekend, and if it follows the pattern of the earlier films the box office will be bolstered by Latino moviegoers.

The Latino audience has seen the three previous Paranormal Activity films in disproportionate numbers compared with the national population. In international territories, the franchise has performed especially well in Spanish-speaking countries.

The three preceding Paranormal Activity films, each of which offer twists on the found-footage style of horror storytelling, have delivered some of the best returns on investment in modern Hollywood history. Made on shoestring budgets (the first film, released theatrically in 2009, cost about $15,000, while Friday's latest sequel was budgeted just more than $6 million), the Paranormal films so far have averaged just under $100 million in domestic release and have proved equally popular overseas, which is rare for horror films.

Just as Paramount starts bagging this weekend's windfall from Paranormal Activity 4, the studio will begin production on a spinoff, The Oxnard Tapes. That film will be cast with Latino actors and aimed even more directly at that audience, although the spinoff will be largely in English. "They really love supernatural stories," Jason Blum, a producer on all four Paranormal Activity films, said of the Latino audience for the films.

Studio executives say courting that audience can be easier than reaching the general population because advertising can be narrowly targeted. But just as devoted spectators like young fan boys will do, Latino moviegoers can be quick to judge (and reject) a movie if they feel it comes up short.

"They are the most open to the idea that there is something out there and engage in the stories in a way that no other audience connects to it," Adam Goodman, president of the Paramount Film Group, said in explaining why Latino patrons flock to the Paranormal Activity films. "They are one of our most critical audiences, but they are also our harshest critics. They can be the most disappointed, and the most vocal."

According to 2010 U.S. Census data 16 percent of Americans identify themselves as of Latino or Hispanic descent, up from 13 percent in 2000. Paramount's movie theater exit data reveals that Latinos make up nearly a third of all Paranormal Activity ticket buyers, which is even higher than the horror genre's average attendance by Latinos, which ranges from 20 percent to 25 percent.

The latest movie, which technically opens with midnight screenings Thursday night, focuses on a strange young boy named Robbie in suburban Nevada whose mother is reportedly hospitalized, compelling a neighboring family to take him in. Robbie and the family's young son, Wyatt, become buddies, but Wyatt's older sister isn't sure the visitor is a welcome addition and is drawn into a spiraling web of very bad things.

Early notices have been mixed to poor, especially compared with the third film, which was the best-reviewed in the series.

The film will be released in about 3,300 locations, including Imax theaters for the first time, and should gross $40 million or more in its opening weekend, easily defeating the other new film in wide release, Tyler Perry's Alex Cross.

To court Latino patrons, Paramount is running Spanish-language radio spots in 10 markets during the film's opening week and has English-language billboards in cities with large Latino populations such as Dallas and Houston.

As the studio has done with the previous Paranormal Activity films, Paramount gives 25 cities early (and free) sneak previews of the new movie based on how many patrons demand it. Tellingly, many of those locations have large Spanish-speaking populations, including Lima, Peru; Santiago, Chile; Mexico City, Bogota, Colombia; Buenos Aires, San Antonio and Fresno.

In some ways, the demographics dramatize a trend in attendance. According to the most recent industry data compiled by the Motion Picture Assn. of America, Latinos account for 25 percent of cinema guests and attend more frequently than any other slice of the population.

The average Latino moviegoer hits the multiplex 5.3 times a year, compared with 3.5 times for whites and 3.7 times for African Americans. In addition to horror titles, Latinos tend to be interested in family films, sometimes accounting for a third of all admissions, equal to their interest in horror.

From Paramount's perspective, that's not a scary thought at all.