In Rematch, Obama and Romney Get Testy Over Jobs, Energy and Immigration 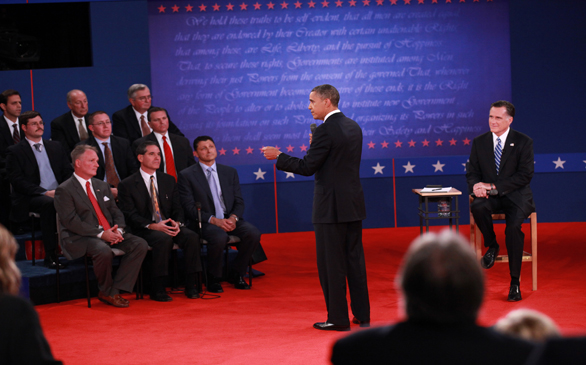 President Barack Obama and Republican challenger Mitt Romney aggressively challenged each other Tuesday night in their second debate, with more than 90 minutes of sharp attacks, interrupted answers and testy exchanges over the economy, taxes, immigration and energy.

The president's partisans were likely pleased with his tough-minded rebound from his tepid and much-maligned performance in the first debate earlier this month. Romney backers will be pleased with his continued willingness to confront his rival.

Romney countered just as vigorously by attempting to reinforce the confident, determined image he showed during their first matchup. The Republican challenger also aimed to show that his conservatism has a compassionate hue and to dispel the notion that he's a wealthy, out-of-touch patrician.

Their second and perhaps pivotal debate had Obama and Romney fighting constantly, sometimes interrupting, and sometimes talking and correcting each other at the same time.

Obama began the debate by quickly attacking Romney on his economic plan, his solution to high gasoline prices and his failure to support the auto industry bailout. Romney recommended bankruptcy for the automakers in 2008.

Don't believe Romney has a five-point plan to help the economy, Obama said. He has a one-point plan, he said - "you can invest in a company, bankrupt it, lay off the workers and still make money ... that's exactly the philosophy we've seen in place for the last decade."

Romney fired right back, and would time and time again.

The candidates debated in a town hall format that allowed them to walk around the stage, address the voters directly and stand almost next to each other as they parried back and forth. Questions came from undecided voters from the New York City area selected by the Gallup Organization. CNN's Candy Crowley, the first woman in 20 years to moderate a presidential debate, regularly followed up the participants' questions and candidates' answers with questions of her own, pressing for more detail.

The stakes for this second meeting were high. Romney is credited with winning the first faceoff Oct. 3, and another stumble by Obama could have doused any momentum his campaign spent months to build.

But the president was much feistier from the outset Tuesday night in a debate that seemed to include every incendiary issue of the domestic agenda.

Foreign policy only came up once, but it involved a question that's dogged the Obama administration for more than a month.

The president was asked why his administration did not provide more security in Libya prior to a terrorist attack that led to the death of four Americans, including the U.S. ambassador, at the Benghazi consulate.

Last week, a State Department official told Congress that she had received requests for more security in Benghazi but that she had rejected them because the department wanted to train Libyans to handle the duties.

Obama had a stern look. "No one is more concerned about their safety than I am," he said.

Though Secretary of State Hillary Rodham Clinton this week said she took responsibility for the administration handling of the attack, Obama said that he was ultimately responsible. "I'm the president and I'm always responsible," Obama said.

Romney blamed Obama for his administration's constantly fluctuating explanation of the attack and said the president was too busy campaigning to fully deal with it. For days, senior officials had painted the attack as in tandem with mob violence that broke out in other parts of the Islamic world that day in response to an anti-Muslim video.

"The suggestion that anybody on my team would play politics or mislead when we've lost four of our own, governor, is offensive," Obama said.

On domestic issues, Romney argued that the nation needs to be more energy independent, and he explained his support of more aggressive exploitation of domestic oil, gas, coal and other resources, as well as approval of the Keystone XL oil pipeline from Canada. "We're going to bring that pipeline in from Canada," Romney said. "How in the world the president said 'no' to the pipeline I'll never know."

Obama supports federal investments in clean-energy research, but he backs only limited offshore drilling and has rejected the Keystone pipeline for now, though has said he will reconsider.

"We're drilling more on public lands than the previous administration, and the previous president was an oil man," Obama said.

The candidates also sparred over taxes. Romney, who has proposed a 20 percent across-the-board income tax rate cut, vowed that higher-income people would pay no less than they do now, while middle-class consumers would get a break.

Obama scoffed. "Governor Romney has a different philosophy," he said.

The president explained his view, with a jab at Romney. "So what I've said is, your first $250,000 worth of income, no change. And that means 98 percent of American families, 97 percent of small businesses; they will not see a tax increase. I'm ready to sign that bill right now," Obama said. "The only reason it's not happening is because Governor Romney's allies in Congress have held the 98 percent hostage because they want tax breaks for the top 2 percent."

Republicans have consistently blocked Democratic efforts to impose higher taxes on the wealthy.

Congress' bipartisan Joint Committee on Taxation has found that even if the most popular deductions were eliminated, such changes would only fund a 4 percent income tax cut.

The candidates battled over immigration. Romney in January urged illegal immigrants to "self-deport," and he said in Iowa during his caucus campaign he would veto the DREAM Act, which would provide a path to citizenship for some young immigrants.

Tuesday, his rhetoric was softer.

Obama countered by recalling Romney's harder line. "His main strategy during the Republican primary was to say, 'We're going to encourage self-deportation,' " the president said.

Another questioner asked Romney how he differed from former President George W. Bush. Both are Republicans, and Bush left office in 2009 with a dismal approval rating in the midst of a deep recession.

Romney listed several the ways the two differ - most importantly, his policies on the economy, his encouragement of small businesses, his plan to increase trade and balance the budget.

Obama disputed Romney, saying Romney and Bush are similar on the economy, but that Romney has gone to a more "extreme place" on non-financial issues, including immigration and Planned Parenthood funding.

US News
Prolonged social distancing would curb virus, but at a high cost
735 views

US News
What we know about Mark Riddell, a test-taking whiz linked to college cheating scam
633 views

US News
California gunman was ex-Marine who might have suffered from PTSD, sheriff says
1,029 views

US News
Rates of 3 STDS in US reach record highs CD says
1,116 views