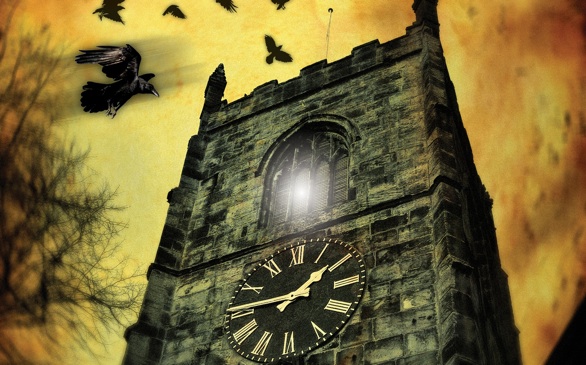 Let’s get this out of the way: I’m a wimp. Roller coasters, scary movies and creepy dolls -- they’re not my thing. A good scary story though? Bring it on.  That’s why I snatched up Matthew L. Swayne’s America’s Haunted Universities: Ghosts that Roam Hallowed Halls as soon as I saw it, despite my fear of all things scary.

The light tomb—240 pages—is filled with stories that run about two to five pages long, and it is neatly separated by place of the haunting. The sections are divided as: “Student Union Buildings and Student Centers,” “Dormitories and Residence Halls,” “Classrooms and Administrative Buildings,” “Libraries,” “Quads, Grounds, and Cemeteries,” “Theaters, Music Buildings, and Performance Halls,” “Sororities and Fraternities,” and “Haunted People and Things” and even “Off-Campus Haunts.”

At first glance, it looks as if Swayne collected the scariest of the scary throughout some of the most well known institutions in the United States. Frankly, I was ready to be too scared to go to school.

However, my excitement was quickly subsided when I discovered that Swayne’s writing style is not a good match for ghost stories. For someone who is easily scared, reading this book alone at night was hardly a difficult task.

This is partly because the writing is often tongue-in-cheek, lightly scattered with puns. Because of the need to explain the history of the college and the people involved, the writing takes away a bit of suspense. This is something other ghost stories might not necessarily have to deal with.

If you’ve ever been interested in reading a history book before, that’s what reading the short stories in this small assemblage was like. It was a very, very interesting history book—you’re acutely aware that these stories resulted from passed-down accounts (some sources are no longer alive). There’s some information in the book that you didn’t really need to know, but at the end of the day, you do really want to know the whole story.

Unfortunately, sometimes the book doesn’t always give you as much as you want, and the way the story told is often messy. Many of the stories would be difficult to follow if read to a large group of people.

To give the collection some credit though, it does hold up a scholarly air (fitting, considering the subject). That is, the author never attempts to convince the reader that, yes, that university is haunted. Instead, he offers reasonable explanations for every story and openly admits in many that all of it may just be folklore passed down to overactive imaginations. Perhaps this reasonableness is the reason why the stories don’t reach their fullest potential to scare. However, one may argue that it is necessary to take the stories seriously, to give it an even more “true story” feel.

Perhaps the biggest saving grace for this collection is that it will easily connect with college students, past and present. There are little mentions throughout the book about dining hall food and college roommates that ground the supernatural stories, helping it become even more believable.

In addition, the 100 or so tales will be a good conversation starter—especially for those that are interested in going to universities like Cornell and Harvard. It should be noted that there are no stories in the publication situated in California (Sorry USC and UCLA -- you’re campuses are ghost-free), and there are remarkably few West Coast campuses represented (University of Oregon and University of Arizona are among the very few).

All in all, there is no need for you to be scared picking up this book.