Barack the Vote is in Full Gear 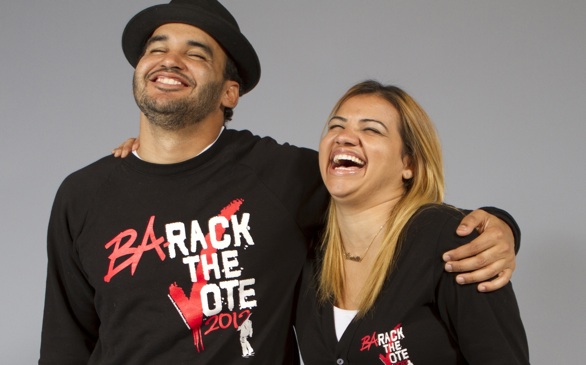 Barack the Vote is a campaign that promotes Obama by selling apparel.

What if you could start a company with your best friend, make money, hang with the president and actually affect the outcome of an election?  Sounds kind of far fetched? Well it may sound that way, but it’s very real.

Brandon Broussard and his sister Lorielle decided to take a chance and see what they could bring to the table by creating the Barack the Vote clothing line.

“Back in 2007 I was in Atlanta at a rally before the Democratic National Convention and saw a sign,” said Brandon. “It said ‘Barack the Vote’ on it, and it just clicked.”

Lorielle added, “Brandon came to me with the idea of designing a T-shirt with the slogan ‘Barack the Vote’ back in the summer of 2007. From there, I designed it, and we worked together from that moment moving forward.”

But how is it working with your sibling, especially on a campaign of this high profile?  Brandon said the advantage of being his business with his sister is that they’re able to communicate in an honest and effective way.

“One cool thing about working with a sibling, specifically my sister, is that we can be brutally honest with each other.  There's no tiptoeing around issues or passive aggressive emails,” said Brandon.  “If something is wrong, we do not hold back.  This is actually helpful because communication is immediate and while there may be some hurt feelings, we quickly resolve whatever the issue is and move on.”

Soon after the rally in Atlanta, Brandon got to work and created 100 shirts to help support Obama’s campaign.  To his great surprise, one of those 100 shirts ended up on a celebrity, and he found himself at a fundraiser hosted by Oprah Winfrey.

Seeing those kinds of numbers goes to show that a good idea you believe in can have more power than you truly think. It’s all about taking a chance and going with your gut.

“It is something I’m passionate about and it really impacted people,” said Brandon. “The best moment was seeing an email from someone I didn’t know, and they had ‘Barack the Vote’ in their signature. At that point I knew this was more than I ever expected.”

Brandon and Lorielle have also made it a point to focus on the college market.

“Our ‘Barack the Vote’ shirts and ‘Behind Obama’ shorts and sweats were designed with college students in mind.  We always imagined the shorts as something girls would wear around their dorm rooms,” said Brandon. “And Barack the Vote has always been about being cool while being politically involved.”

He added, “We feel like that's the essence of the college student.  I can vote and have a beer.”

So, what happens with a product when it’s not needed anymore?

“As the election came up, sales fell off. I had never run a business before and I wasn’t ready for the drop off. I figured it was over,” said Brandon. “I thought it was all over and just hoped for 2012, but that was a long way off.”

But now that Obama is back for another run at the White House, Barack the Vote is in full swing.

“Everyone made us feel that we should do it again. But honestly, this time it feels more important; it’s a call to action,” said Brandon. “The president needs more help than he did in 2008, and this is our way of doing something.”

“Everything is so different because Barack Obama is already the president, so history was made in 2008,” added Lorielle. “Now people think he's a shoe-in and that they don't need to do as much this time around when that's just not the case. That's why we started Barack the Vote back up this year: to do our part and make sure people are doing what they can do to help keep our president in office.”

With the new shirts out in full effect, BarackTheVote.com is getting more traffic than ever before.

Brandon and Lorielle are also making money that is going right to the Democratic Party to help with the election. It’s not just about promoting the cause, but it’s also about donating substantial profits to support the campaign and trending on most social networks. They have donated more $160,000 this year to the campaign, and Barack the Vote items have been seen on Cher, Will.I.Am, Perez Hilton, Kerry Washington, Victoria Secret's Model Selita Ebanks, rapper 2 Chainz, Big Sean, Tatyana Ali, Rep. Barbara Lee, Nick Cannon and many more.

To view the line of shirts and accessories, visit BarackTheVote.com