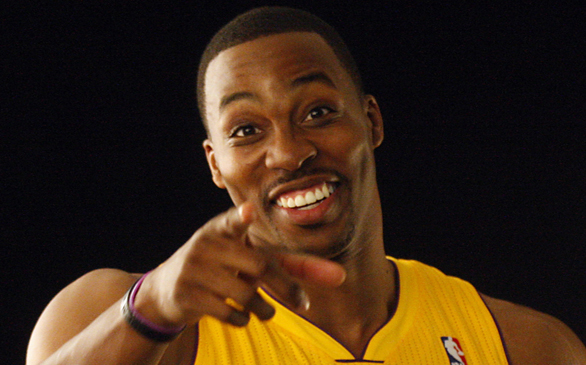 The moment that everyone in Los Angeles has been awaiting could finally arrive this weekend at Staples Center. New Lakers center Dwight Howard could be making his debut on Sunday, according to ESPNLosAngeles.com's Ramona Shelburne and a report by Yahoo! Sports.

According to an ESPNLosAngeles.com source, Howard has told teammates and friends that he's eyeing to suit up to play Sunday.

Yahoo! Sports cited that the Lakers have targeted Sunday's game versus the Sacramento Kings for Howard's first game in purple and gold. Howard told Shelburne that he's nervous about it, if it actually happens.

"I told Steve [Nash], 'I think I'm going to be a little nervous out there the first time,'" Howard said after the Lakers practiced on Thursday in El Segundo. "He said he'd help me through it. "But this is a new team, new city, and I think everybody is expecting a lot out of me, so I have to make sure I keep all that out of my mind when I play in front of the home crowd."

Howard, who was traded from the Orlando Magic to the Lakers this summer, underwent back surgery to repair a herniated disk in April, and that has limited his practice and playing time this offseason.

The Lakers have four more exhibition games before their Oct. 30 season opener against the Dallas Mavericks, including tonight's game in Las Vegas, Sunday and Wednesday at Staples Center and Thursday in San Diego.