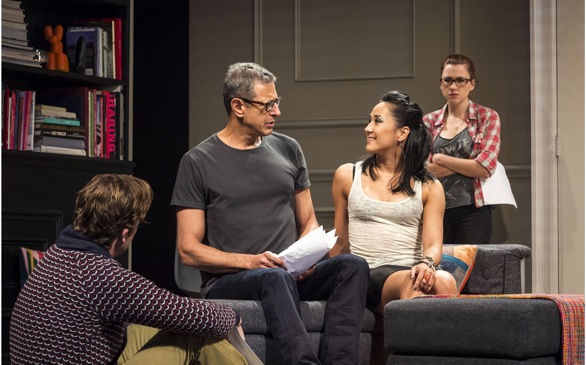 It’s an art that requires finesse, determination, inspiration and a heavy dose of patience. Sitting before me is a mainly white screen with a few black markings running across the page. The prospect of filling the entirety of my assigned word limit is daunting, yet thrilling - terrifying, yet compelling. There is nothing easy about writing, and there is certainly nothing easy about criticism. And yet, we continue on with this crazy love affair. The deadlines cause us to stress, and the empty pages laugh in our faces. But by far, the prospect of having our words read is what a writer’s nightmares are made of.

This introspection as a critic was inspired by "Seminar," the sardonic play from last year by Theresa Rebeck. Playing now through Nov. 18 at the Ahmanson Theatre in downtown Los Angeles, "Seminar" is set in modern-day New York City.

Four aspiring writers - Martin, Kate, Izzy and Douglas – have paid $5,000 to attend a private seminar with Leonard, a once highly lauded writer who has since taken up teaching to make his rent.

Leonard is skilled in the no-holds-barred style of instruction. In the first session alone he brings Kate to tears and leaves the other students wary of presenting their work in fear of his malicious comments. They all do present by the end, except for Martin whose weariness unveils the real impediment in his journey as a writer: he writes not for the reader, but for his own emotional wellbeing.

Oh yes, there’s sex and talk of sex and curse words and all that stuff too. But at its heart, "Seminar" is an ode to all artists that craft the mirror into which we glance, recognize and admire.

The play is hilarious at times when the words flow quickly and the play’s marionettes move to the rhythm that Rebeck intended. At other times, what ensues is a grave commemoration to the good old-fashioned art of writing words that use and manipulate the actor as a vessel, not the other way around. Rebeck’s work is fast, contemporary and, above all else, smart in the way that modern plays should be. There is very little that drags, even though the majority of it is set in the same apartment and focused on the same five people.

Jeff Goldblum reprises the role of Leonard, which he performed on Broadway last summer. A veteran actor with numerous films, television shows and stage performances under his belt, Goldblum is the authority and masculine stage presence required of Leonard. His natural charm is potent in large doses, so that by the end, the audience is swimming in a haze of gratitude for and admiration of his performance.

Comedy
Impractical Jokers aka The Tenderloins, Serving Comedy Up "Well Done": Live at The Grove of Anaheim (1/17)
3,893 views