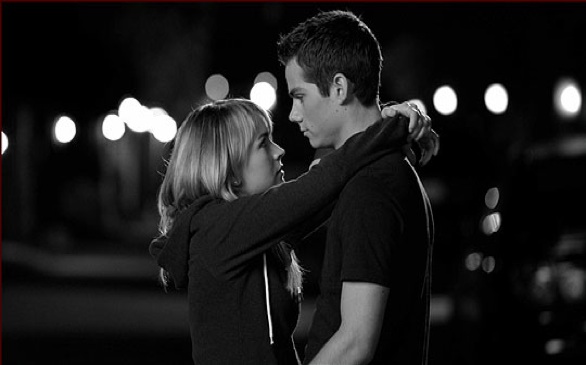 In young Hollywood, people come and go quickly without much notice. You can be famous one second and non-existent the next. Only a very select few make the transition to full-blown celebrity. However, it’s safe to say that Britt Robertson is one of young Hollywood’s brightest rising stars.

She was born in North Carolina where, with inspiration from both her mother’s soap operas and her grandmother’s theatre background, she had her first acting experience.

“My mother and soap operas. She has a slight obsession!” she lauged. “We’d be sitting in front of the television while I did my homework, and we’d watch ‘Days of Our Lives’. Also my grandmother was really into theatre at a young age, and she saw that spark in me. So, she encouraged me to try theatre and eventually film and television.”

At 10, Robertson starred in her very first project, playing Young Sheena in a remake of the 1955 television series, “Sheena: Queen of the Jungle.” Throughout the following years, she was part of various other television series and lesser-known films. In 2007, she starred opposite Steve Carell in the comedy Dan in Real Life.

Robertson also starred in several more television series like “Swingtown” and “Life Unexpected,” both of which were unfortunately cancelled. Luckily, she never stayed out of the spotlight too long. But if acting hadn’t worked out, she had a back-up plan.

“When I was younger, I wanted to be a marine biologist!” Robertson revealed. “I love the ocean, and I love animals. It seemed like a perfect combination. After I started focusing on it in school, I realized what a commitment you have to make. At that point, I had to make a decision: Do I stick with acting and fully commit to that, or do I want to try something else? For now, I’m sticking with acting, but you never know! You could see me on a ship somewhere, diving into the deep blue!”

In 2011, Robertson had a small role in the film Scream 4, playing one of Ghostface’s first victims in the film. Almost directly afterwards, she landed the starring role in the CW’s teen witch drama, “The Secret Circle.”

“Usually I’m looking for something that inspires me to keep wanting to be an actor. Whether it’s working with someone who I really respect or someone whose vision I understand,” Robertson told Campus Circle of what she looks for when accepting a role, “ Or it could be that the story means something to me, or the character is something I’ve never done before.”

Now, Robertson stars in the new film The First Time, written and directed by Jon Kasdan. The coming of age story was just released in theaters, and it generated some fair reviews when it premiered at Sundance in January.

“It’s about two young, high school kids who meet one night at a party. They start talking about life and love and high school. They end up spending the evening together, and it’s about a bunch of firsts that they experience throughout the course of one weekend. It’s a little bit of a coming of age story within three days,” said Robertson, who was also quite enthusiastic about working with Dylan O’Brien of “Teen Wolf” fame.

“Working with Dylan O’Brien was such a pain in the butt!” she joked,. “I will never work with him again!”

She laughed hysterically, “No, Dylan is amazing! He’s actually one of the best actors I’ve ever worked with. Working with him was a dream come true. We’re two very different actors, and being able to bring different things into this film and learn from one another was really fun.”

However, Robertson admitted that there were also some challenges when working on The First Time.

Robertson added, “But at the same time, it was a blessing that he knew exactly what he wanted. He was able to communicate that. So, the hardest thing was just to be able to achieve the vision he had for this film. That’s why I wanted to be a part of it in the first place; I loved what he was trying to do with this movie.”

When asked what her career goals were, Robertson kindly explained that she doesn’t want to plan too much out. She’d rather see where life takes her.

All in all, Robertson has a good head on her shoulders - something that may prove to be essential for her continued success in Hollywood. It also seems that she is taking the road that some of her favorite actors have taken in the past - making the transition from teenage star to respected actor.

The First Time is in theaters now.