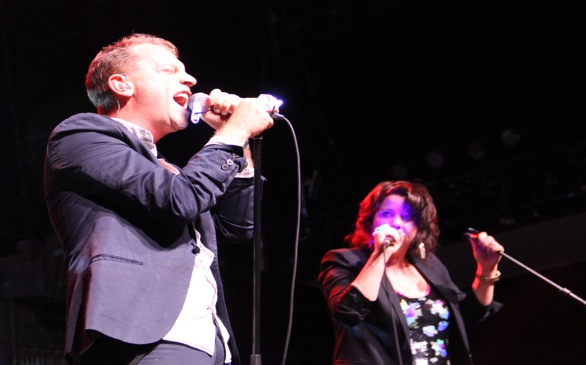 Torquil Campbell and Amy Millan took the stage with the other Stars' members at the Mayan.
(Credit: Amanda D'Egidio )

The Mayan in Downtown Los Angeles was transformed into a space galaxy as the Stars took the stage.

Almost like the planets, disco balls hung from the ceiling while the reflected lights circled around the interior as though we were the sun in this sound system.  With California Wives and Diamond Rings opening for the band, they definitely got the crowd ready for the headliner.

California Wives led the crowd to a mellow and soothing folk sound whereas, Diamond Rings had the people transported to a disco age with his David Bowie-inspired style, wearing all white and an electric white guitar accompanying his electronic pop and monotone vocals.  Like being caught dancing in your room alone, he had no shame and awkwardly danced around the stage, while the crowd was unsure whether to dance or politely nod their heads.

With their glasses on and ready for an epic night, drummer Pat McGee, keyboardist Chris Seligman and guitarist Evan Cranley took the stage while lead singers Amy Millan and Torquil Campbell came out with light rings on their fingers.  They opened the night strong with the song “Theory of Relativity” off its album, The North, making the audience get right into the beats of their jams. McGee threw a paper down to Campbell after the first song, which said, “Sing hard to combat room/feedback. Thanks.”  The band definitely combatted the sound in this Aztec land.

Campbell engaged a lot with the audience by trying to talk after songs.  Sometimes he would bring out a light blue melodica to help support the melody of the softer notes.

Seeming to be taken into outer space, many couples of all ages and sexes were in the crowd holding their partners and kissing them during this band’s set.  With many of the lyrics relating to love, heartbreak and loss, an array of emotions paraded around this space.  Definitely making people in the crowd think of an ex of theirs, Campbell stated, “This song is dedicated to the one you hate the most,” as “Your Ex-Lover is Dead” was played. But the crowd did not hesitate to still sing along, “I’m not sorry I met you, I’m not sorry it’s over, I’m not sorry there’s nothing to save, I’m not sorry there’s nothing to save...”

From mellow sing-a-longs, to ones with the bass taking over, Stars really showed the crowd an enjoyable show.

Before the encore, Campbell announced, ““We are Stars from Montreal and so are you…” which was followed by a drum off between McGee and Campbell while each band member lingered off stage one by one. Following was a simple and mellow encore where Campbell and Millan sang alone as the rest of the band sat and listened.

Between the sweet tones of the duet to their romantic lyrics, Stars definitely succeeded in setting the mood for the lovebirds in the crowd.  This space galaxy was filled with love as Stars put on a great performance with a certain twist on love, but still being a heartthrob in this transformed galaxy.