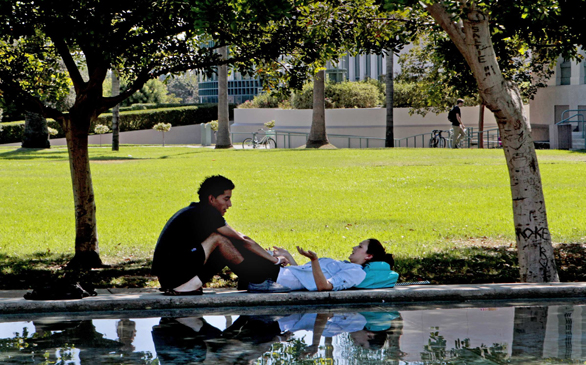 Many colleges seek donations for new construction or scholarships. Pasadena City College, however, has an additional goal that was unthinkable before California's budget crisis forced community colleges to slash course offerings.

The school is seeking donations from alumni and others to restore some of the 570 classes it planned to cut this academic year. The campaign, launched in April, has received about $89,400 in donations, and the school is also devoting $106,000 from savings resulting from some cost cuts, officials said.

The result: 35 classes are being revived in such high-demand fields as biology, political science and psychology.

Beyond the effect on that 30,000-student campus, the effort highlights how community colleges around the state and nation are increasingly courting donors and reconnecting with their alumni - tasks often neglected when state funds were more plentiful.

"Community colleges are definitely taking huge steps in fundraising that they have not in the past. Ten years ago, you would never hear of us raising money for this kind of thing," said Bobbi Abram, executive director of PCC's foundation, which raised about $2 million last year.

More two-year schools are trying to follow a path long traveled by four-year public and private universities. However, some experts say the community colleges face special difficulties since many alumni tend to give loyalty and cash to the four-year colleges where they subsequently transferred and earned a degree.

In addition, the community colleges usually don't have the big league sports or scientific research that can attract donations. And because of the intermittent enrollments of many students, it is not always clear who is an alumnus, and it can be difficult to locate them.

Two-year schools averaged just $1.2 million in donations in 2011, compared with $90 million at research-oriented universities, according to a national survey by the Council for Aid to Education, a New York City-based nonprofit. Less than 1 percent of community college alumni donate, while nearly 20 percent do so at some four-year colleges, the survey found.

But if they are contacted, many alumni acknowledge that their community college education was valuable and they are willing to donate to their former schools, whether at a bowl-a-thon or through estate bequests, according to some school officials.

"More schools are coming to the realization that there are philanthropic dollars at hand," said Paul Heaton, who directs a center on community colleges at the Washington-based Council for Advancement and Support of Education. But in contrast to most four-year schools, many community colleges are just now taking the first steps: finding and reaching out to potential donors. "You don't get if you don't ask," he said.

Catherine Hazelton attended PCC in the 1990s and went on to earn a bachelor's degree from Scripps College and a master's in public policy from THE University of California, Berkeley. She donated to Scripps and UC Berkeley but was never contacted by PCC. Recently, after she and a colleague reminisced about how the Pasadena college "led us to our career paths," Hazelton discovered the new Graduation Fund on the school's website.

"I was really struck by the idea that classes were being cut at the school I attended, and that this transformative experience I had may not be available to other students," said Hazelton, a senior program officer at the James Irvine Foundation. "It just captured me emotionally and made me want to give."

So, with a personal donation and a grant from the foundation, she arranged a $1,000 gift.

Across the 112 community colleges in California, state funding has not kept pace with enrollment growth, and course offerings have been slashed by almost a quarter since 2008.

The news of some very large gifts recently made more colleges realize the potential for outside help during these tough budget years, officials said.

Last year, a local dermatologist gave $14 million to Bakersfield College, mainly for scholarships, in what was described as the nation's largest donation from an individual to a community college.

In 2008, the Bernard Osher Foundation established an endowment to help students at all California community colleges pay for books, supplies and tools; by this year, Osher has provided $40 million and local colleges have raised about $30 million in matching funds.