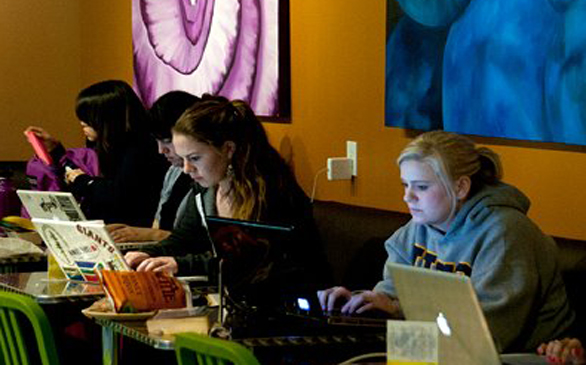 Posted by an "international business consultant" in Davis, the would-be employer was frequently overseas and needed help running errands, paying bills, mailing packages and doing shopping. The pay: $150 a week for 10 hours of work, plus mileage and expenses.

"It sounded perfect," recalls Sebiaa, a senior majoring in political science. She immediately applied online, sending her resume, a crisp cover letter and a request for a face-to-face interview.

To Sebiaa's delight, she was "hired" instantly. And that's when the job description suddenly became something very different.

Her unseen boss, supposedly in Sweden meeting clients, emailed Sebiaa's first assignment: She'd receive a $1,100 check, to be deposited into her own account. After deducting $150 as the first week's "pay," she was to wire the remainder to an address in the Philippines.

"As soon as she told me that, I knew it was like things I've read about Craigslist scams," said the 21-year-old. "It smelled really fishy."

Officially known as a "payment-transfer" scheme, it's a familiar scam that's seduced many adult job seekers for years. Now it's trickling down to college kids.

The ruses vary. In some cases, students are told they're hired, then informed that the "boss" has taken ill on vacation and needs funds wired to his account. The students are assured that they'll be reimbursed, plus expenses.

At a time when college costs are accelerating and part-time hiring is stuck, this type of online scam is particularly troubling.

"Students are having a hard enough time finding a job and are among the last who should be victimized. It's a tragedy when anyone trying to find a job becomes a victim," said Sylvia Kundig, an attorney in the Federal Trade Commission's San Francisco office.

The phony job ads come as college graduate hiring by genuine companies appears healthier. According to the National Association of Colleges and Employers, job offers for U.S. college graduates this June are expected to be up 13 percent from a year ago.

That's why these job scams are doubly harmful, said Holland. "The crime is it reduces students' confidence in applying for jobs. And it hurts legitimate companies trying to hire students for legitimate jobs."

Even more deceptive, the ads appear on the universities' own job-recruiting websites, lending them a credibility that makes many students feel it's safe to apply.

"We've had about 10 this fall alone," said Marci Kirk Holland, manager at the UC-Davis Internship and Career Center.

Campus career officials at UC-Davis and CSUS say they work hard to vet the hundreds of ads that appear daily on their websites. The bad ones, they note, represent a very small slice of the daily postings.

Most of the ads that slip through, they say, are those sent via NACElink, an online job-posting service that provides access to national companies that want to reach students on multiple college campuses. Efforts to reach a NACElink representative were unsuccessful.

Work-from-home or virtual job offers often sound tempting, but they could be so-called "payment forwarding" or "payment transfer" scams. That's when a seemingly legitimate company lures job seekers into depositing a check into a personal account, then forwarding the funds to a third party. The checks then bounce, leaving the victim on the financial hook.

Be wary if a job ad:

-Asks to "verify your identity" by scanning your driver's license or other ID.

-Uses an email address that is not a primary domain (i.e., calls itself "Omega Inc." but has a Yahoo or AOL address).

-Give out personal account information to a prospective employer, especially if they've never met in person.

-Agree to direct deposit of paychecks until they know their employer.

-Forward, transfer or wire money to an employer, no matter how compelling the request may sound.