NHL to Get TV Money Even Without Games 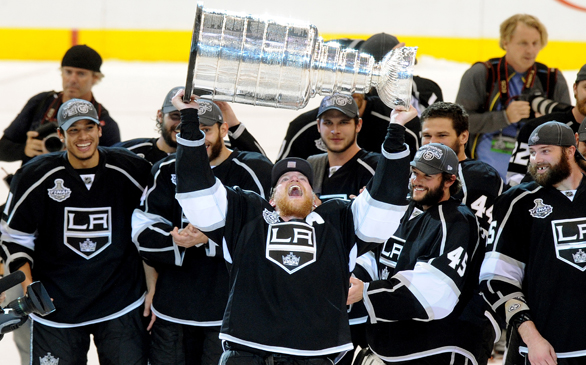 In a way, the NHL lockout is being partially funded by Comcast, the Flyers' parent company.

The NBC Sports Group, a subsidiary of Comcast, is paying the league about $180 million in rights fees this season, and a network spokesman said on Monday that the NHL will receive all of that money even if no games are played in 2012-13.

There is an asterisk, however. If no games are played this season, the league will grant NBC a "free year at the back end of the agreement," said the NBC spokesman, who asked to remain anonymous.

Last spring, the NHL and NBC signed a 10-year, $1.8 billion TV deal that starts this season and includes the highly popular Winter Classic. The deal has been erroneously reported as a $2 billion deal, the spokesman said.

Theoretically, the 11th year would be worth more than $180 million, so NBC would seem to be gaining in the trade-off and paying for the first year even if all games are canceled.

The lockout "didn't take us by surprise," said the spokesman, "which is why we have protection" at the back end of the deal.

It's fair to wonder how resolute the NHL would be in its negotiating if it didn't have the $180 million guarantee in its back pocket.

On Monday, the lockout reached its 37th day, and no talks are scheduled between the league and the players union. The sides are locked in a labor war that has canceled the first three weeks of the season.

The NHL says it needs to have a new collective bargaining agreement in place by Thursday to save an 82-game season. The league wants to start a one-week training camp on Friday and begin the season Nov. 2.

The league estimates it will have lost $330 million if games canceled through Nov. 1 are not played at a later date.

Some of the NHL games this season were scheduled to be telecast on NBC, and most were slated for NBC Sports Network, formerly Versus. To replace the NHL games, NBC is showing soccer, boxing, college hockey, and college basketball, along with rebroadcasts of the London Olympics.

NBC would not say how much advertising revenue it is losing by not having the NHL telecasts.

Locally, Comcast said it not giving refunds to subscribers because they do not have Flyers games during the NHL lockout. Comcast SportsNet is instead providing alternative programming, a spokeswoman said.

To help fill the void created by the lockout, CSN is showing "Philly Sports Classics. The network is "in discussion" to add some AHL Phantoms games, a spokeswoman said. The Phantoms' Feb. 22 game at the Wells Fargo Center against Wilkes-Barre/Scranton has been on the CSN TV schedule since before the lockout.

Breakaways. Flyers winger Wayne Simmonds, who had four goals, 10 assists and 35 penalty minutes in nine games with Crimmitschau, and the St. Louis Blues' Chris Stewart have left the second-tier team in Germany and joined Liberec in the top-level Czech Republic league. ... Brayden Schenn leads the 2-2 Phantoms in goals (3), points (5) and shots on goal (20). Defensemen Oliver Lauridsen and Cullen Eddy lead the team with plus-3 ratings. ... A free skating session will be open to the public Nov. 9 after a 4:30 p.m. ceremony for the grand opening of the refurbished Tarken Ice Rink in Oxford Circle. The Ed Snider Youth Hockey Foundation played a major role in the refurbishing.