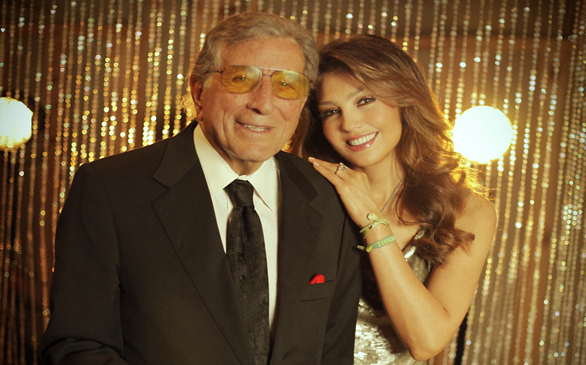 Over the years, Italian-American music legend Tony Bennett has delivered some of the most prolific duets-themed albums ever. With his latest release, Viva Duets, he continues his endearing work.

Viva Duets, sporting Bennett’s undeniably soothing classical music, is already one for the record books. His melody “Return To Me (Regresa A Mí)” with Fernández shines with English and Spanish lyrics from both acclaimed acts. It’s an original recording by Dean Martin, but Bennett and Fernández transform the track; while singing the piece, they control and own it with their resplendently, distinctive vocals.

Bennett’s songs, such as “For Once In My Life” with Anthony and “Cold Cold Heart” with Vicentico, are entirely warming and enriching. And the tracks with Thalía (“The Way You Look Tonight”), Aguilera (“Steppin Out”) and Estefan (“Who Can I Turn To (When Nobody Needs Me)”) add a sensually intriguing touch to Viva Duets.

All of these duets are very entertaining – vocals, lyrics and sounds. Overall, the production carries an immensely artistic value.

Interestingly enough, there is also a Viva Duets: Deluxe Edition, which is available only at Target stores or Target.com. The Deluxe Edition features four exclusive tunes: a duet with Brazilian artist Maria Gadú titled “Blue Velvet;” one with Brazilian artist Ana Carolina named “The Very Thought of You;” “Don’t Get Around Much Anyone” along side Spanish artist Miguel Bosé; and an alternative version of Bennett and Thalia’s collaboration of “The Way You Look Tonight” with only an acoustic guitar.

The four tracks add musical depth to the album, resulting in a naturally diverse formula for earning differentiation within the industry. Bennett knows what he’s doing, and he executes it masterfully.

Bennett, who specializes in the genres of traditional pop and jazz, reaches an international triumph – one for the ages – in Viva Duets for its way of carefully receiving these Latin music acts into his artistic world. It goes beyond the level of greatness.

In Viva Duets, Bennett achieves yet another musical masterpiece.