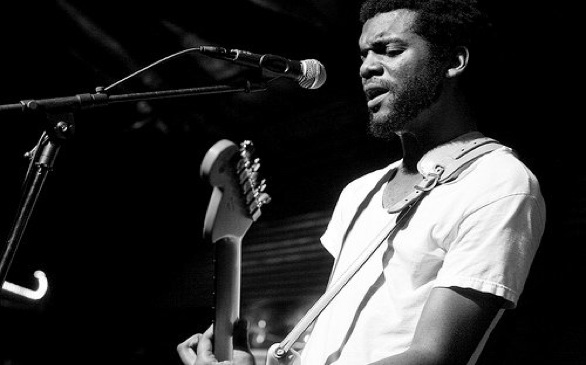 Is Gary Clark Jr. the “next Hendrix” or simply a “savior of the blues”?

No one seems to have the answer, but the Austinite has built quite a reputation for himself over the past year by playing practically every music festival in the U.S. and garnering praise from legends like Eric Clapton and Jimmie Vaughan.

Now after releasing The Bright Lights EP in 2011 and spending significant time on the airwaves, Clark proves on his full-length major-label debut that he’s certainly more than a one-trick pony.

Released this week, Blak and Blu explores Clark’s wide range of musical styles as he delves into his own brand of blues on a handful of tunes and flirts with R&B, soul and hip-hop.

That’s unfortunately where he runs into trouble, though.

Clark cooks up a mean batch of blues/rock for seven minutes and change on “When My Train Pulls In,” which peaks past the midway point when he transforms into a young Stevie Ray Vaughan. But he follows it up with smooth R&B on the album’s title track that only ends up hiding his real talent.

A similar transition plays out with “Travis County,” a distinctly old school rock ’n’ roll song that makes you wonder if Chuck Berry has a new hit out, and the ensuing track, “The Life,” which feels more like a half-hearted attempt at hip-hop.

Clark swings and misses a few more times on his way to the finish line; the ’50s doo-wop on “Please Come Home” feels just as out of place as the reggae-inspired “You Saved Me” and Al Green-flavored “Things Are Changin’.’”

But Clark finds some success when venturing into other musical realms, opening the 13-song LP (the deluxe edition features two bonus tracks) with a slice of Stax-style soul on the horn-driven “Ain’t Messin ’Round” and later channeling his inner Lightnin’ Hopkins during “Next Door Neighbor Blues” with one slide guitar riff after another.

Clark, who has shared the stage with the likes of B.B. King and Buddy Guy in the past, comes back to his roots at other points in the album to infuse hints of The Allman Brothers Band and The Black Crowes into “Glitter Ain't Gold (Jumpin' for Nothin')” and croon about lost love over gritty guitar licks on “Numb.” A few songs later, he offers his best Jimi Hendrix imitation with “Third Stone from the Sun/If You Love Me Like You Say,” exhibiting remarkable precision and grace.

Still, there’s no secret Clark is at his best when he’s making his Gibson ES-335 sing and squeal in between notes. After all, there’s a reason why Rolling Stone named him last year’s “Best Young Gun.”

If Clark had stuck to that formula throughout Blak and Blu, he may have struck sonic gold. Instead, we’re left aching for more of what made him a household name in the “live music capital of the world” a decade ago.

And if Clark can’t save the blues from fading into irrelevance these days, who really can?

Blak and Blu is available on iTunes.