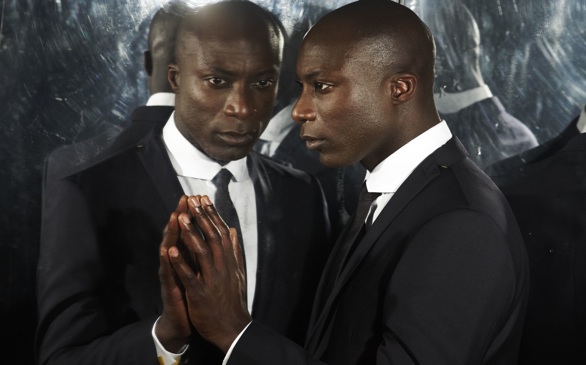 A sharp, vibrant mustard suit is being auctioned off on eBay for $802-- a bargain, considering the $3,200 that the retail price will cost one stylish nut. What big sartorial label is on the listing’s name? If you’re guessing Gucci or Armani, try again. Or just add this new entry on your fashion-pronunciation-to-learn list: Ozwald Boateng.

Born of Ghanian immigrant parents, Boateng is a 47-year-old British designer who, despite having earned acclaim in fashion circles and having dressed Hollywood stars like Will Smith and Jamie Foxx, isn’t an American household name just yet. In Europe, however, it is a different story.

At 16, he asked himself, “Who are the most famous designers in the world?’ Chanel, Armani, Yves Saint Laurent, Valentino... everyone is using their name. So if you want to be a famous designer, then you’ve got to use your name!”

Like his suits, Boateng is always meticulously dapper with a demandingly vibrant edge. His character is so big that, what started as a six-month project commissioned by Canon to test out a new camera, filmmaker Varon Bonicos’ profile of Boateng turned into a 12-year endeavor. Pattering around the world (four continents to be exact) resulted into 98 minutes of documentary footage, a look at Boateng’s astronomical rise as a designer and the decline of his two marriages.

Previous personality profiles painted in fashion documentaries (Anna Wintour in The September Issue, Karl Lagerfeld in Lagerfeld Confidential, Isaac Mizrahi in Unzipped) focus on the creative processes of their subjects. A Man’s Story does not give us that as much as we are shown a businessman often stressed and indignant as he runs his empire (and not unjustly so).

One minute lights malfunction in the middle of his fashion show; the next minute he discovers that his Savile Row office has been emptied of next season’s collection by burglars. As the years go by, however, success accumulates, and we are made witness to Boateng’s extravagant international lifestyle as it unravels from one Chateau Marmont penthouse stay to another.

The growing friendship between the filmmaker and subject becomes apparent, although not deliberately so. Through Bonicos, the audience gets a front seat to Boateng’s personal life on screen.

Camera on hand, the director captures the moment the designer meets Gyunel, a beautiful Russian model whom he married and had two children with. As his career takes him to Paris (serving a three-year stint as Givenchy’s creative director), Los Angeles (filming a reality show for Sundance) and Ghana (spearheading a philanthropic foundation for African causes), their relationship deteriorates.

The film’s most poignant scene perhaps, is a phone conversation that Bonicos sets in the beginning and end of the film. An angry Gyunel screams, “I regret the day I met you. I’m sorry, but it’s true.” Almost incoherent in the opening scene, the filmmaker enlightens and subtitles the conversation, with Boateng relating to the camera that the argument escalated from the cost of a plane ticket. Their relationship blossoms and fizzles before our eyes. Success indeed comes with a price.

In fact, above anything else, that is the lesson to take away from the film. Someone less than a fan may find the documentary more a parade of self-indulgence-- both on Boateng (propensity for a luxurious lifestyle) and Bonicos' (no-holds barred access to a famous talent) parts-- than a depiction of an artist at work.

Although there are many opportunities that the director missed by not probing into instances that could have been explored more, A Man’s Story is still an interesting telling of one man and his sharp, vibrantly colored suits.