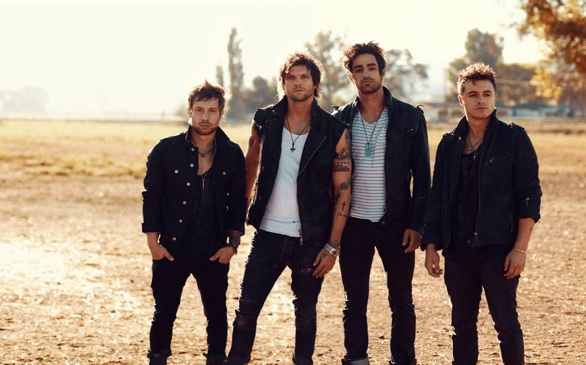 Boys Like Girls is back with an upcoming show and a new album in the works.
(Credit: Cameron Rad)

“[I'm] hanging out in the bus, we play in a few hours,” drummer John Keefe of Boys Like Girls said at the beginning of our chat.

Keefe has been a member of the alt-rock band since its formation in 2005. After its meteoric rise to fame, particularly following the 2009 release of its successful sophomore album Love Drunk, the usually-communicative Boys Like Girls went under the radar starting in early 2011, no longer putting out any updates or holding any shows.

“I knew we were going to get together again. It wasn’t like we broke up,” said Keefe. “We took some time and enjoyed other parts of life for a minute, and when it felt right, we did it—it was an organic process, the whole thing.”

The “it” Keefe referred to is the band’s long-awaited third studio album, Crazy World, which will release on Dec. 11 after being pushed back from its original fall date.

The band released three songs from the album this July, including “The First Time.”

It’s easy to see the change that three years has brought to the band. For one, “Life of the Party,” one of the three songs on the new E.P., has an undeniable country influence, which is understandable since lead vocalist Martin Johnson spent his down-time in Nashville, focusing on working with writers like The Warren Brothers and Luke Laird.

“You can hear a bit of that twang. I’m a big fan of things that came out of there,” said Keefe. “Which is cool; I don’t mind it. I grew up in the country; I grew up on a farm.”

It was also the first time that the band recorded in L.A., which Keefe enjoyed because he considers good weather as one of his inspirations. He reminisced fondly of hiking with the other band members: Johnson, guitarist Paul DiGiovanni and bassist Morgan Dorr.

In addition, the drummer revealed that the band worked leisurely on Crazy World, which he describes as “big, fun and awesome.”

“That’s why it took so long,” said Keefe. “We did try to force the record out and we were like, ‘Screw this.’ And we threw it away, started fresh.”

Still, the group was anxious to start recording and performing.

“We wanted to get [songs] out there as fast as possible so we could start touring,” said Keefe. “We wanted to see how people reacted to the songs."

Boys Like Girls is very grateful to its fans that have patiently waited for the band to come out with new material and perform more shows.

Before every show, Keefe said, “We huddle up, and we’re like: ‘Alright, this show is no different from any show. We can only do better.’ We just try to go out there and give 110 percent every night.”

And Keefe said the fans give them back 110 percent every time, too.

“We always say we have the craziest fans in the world,” he said. “They’re bringing us gifts and they scream and they’re loud and they’re sweaty and just passionate.”

Keefe also gave some words of advice for aspiring musicians.

“Just get out there and do it. Don’t worry what other people think,” said Keefe. “It’s an art; you got to keep going…Just keep pushing through it. You’ll be okay.”

Boys Like Girls will be performing at The Wiltern on Nov. 3.