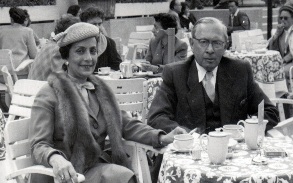 Filmmaker Goldfinger dives into his grandparent’s past in this documentary.
(Credit: Goldfinger / Tuchler Family Archive)

We all know the history of WWII and the Holocaust. We learned in junior high/high school that Adolf Hitler and the Nazis were responsible for the expulsion and murder of six million Jewish men, women and children.  However, not many know that some Jewish people worked in conjucntion with the Nazis and voluntarily agreed to leave Germany and set up civilization in Palestine, urging other Jewish people to do the same. These people were Zionists.

The Flat, a documentary by Arnon Goldfinger, tells the story of how different generations viewed the Holocaust. The story begins when Goldfinger’s grandmother passes away and he, his mother and siblings are left to clear out her apartment in Tel Aviv, Israel.

As he digs up her old purses, gloves and shoes, Goldfinger finds letters and newspaper articles that indicate his grandmother and grandfather were Zionists. From there, he embarks on a journey to find out exactly what his grandparents’ role was in the Holocaust and what were the details of their complicated friendship with a Nazi and his wife.

The documentary is both entertaining and informative. Immediately, the viewer is pulled into the story as you learn different aspects of each of the characters.  You fall in love with the family as they laugh and reminiscence about their grandmother, trying on her animal fur and gloves. Even though most of the dialogue and conversation is in German and Hebrew, it does not prevent the viewer from understanding the emotion each character possesses (plus, the subtitles at the bottom are somewhat helpful).

One scene in particular will touch hearts. Goldfinger and his mother, Hannah, are sitting around a table. Goldfinger had just done some more investigating into his late grandmother’s past, and he hands his mother a letter he found addressed to his grandmother.  Hannah, who was unaware of her parent’s involvement in the Zionist movement and the effect the Holocaust had on her family, is shocked to see that the letter is from her grandmother (her mother’s mother and Goldfinger’s great grandmother).

At first, Hannah denies that the letter is from her grandmother (named Suzi) since she had never met her before. However, Suzi writes about how much she misses Hannah and her mother and signs her name at the bottom.  Hannah is forced to accept that she did meet her grandmother when she was very little…and that Suzi was murdered during the Holocaust.

This realization might bring tears to your eyes (it did for me).  Along with this and other emotional scenes, it’s proven that The Flat is a tearjerker that keeps viewers involved and invested in a family’s search for answers.

The cinematography and pacing throughout the documentary was great. Never once did I feel lost with the location change or with the introduction of new characters.

However, at times it was hard to understand the dialogue and accents. Yes, it helped when the subtitles showed up on the bottom of the screen, but as someone who tends to read slowly, I sometimes wished the words stayed on the screen a bit longer and were more legible.  Nevertheless, as previously stated, it did not take away from the mood and tone of the documentary.

The Flat is an emotional story as well as an interesting history lesson. If you can withstand the subtitles and foreign dialogue, there is no reason why you wouldn’t leave the theater feeling more knowledgeable, enlightened and touched.

The Flat releases at the Landmark in Los Angeles on Oct. 24. It will release in Pasadena, Encino and Costa Mesa on Nov. 2.