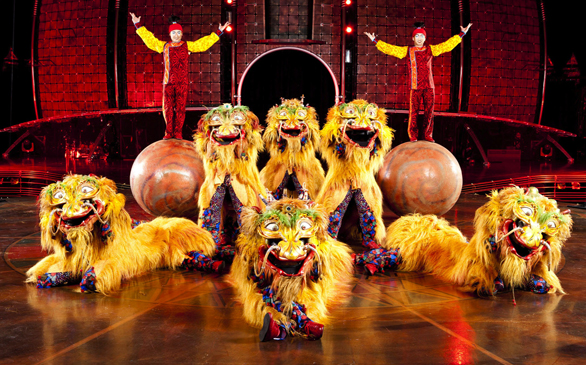 A dragon and lion are the two prominent creatures within “Dralion,” which is how it receives its name. The blend of Cirque du Soleil’s circus approach and that of an ancient tradition of Chinese acrobatic arts results being an enthralling pleasure for the public, which witnesses a delightful show based on humans and nature.

“Dralion” begins with a set of clowns: Giovanni, Vicenti, Alberti, and unknown one. Throughout the performance, they sporadically appear on stage in hilarious fashion – executing funny stunts and telling jokes, among other things. Their attire is an added laugh in itself.

One thing to know about the cast in “Dralion” is that they’re all professionals exercising what they love to do: entertaining an audience. And they surely do that from beginning to end. The show features many electrifying acts, including 11 members twirling and throwing long bamboo poles up in the air and gently receiving them once on the ground.

Additionally, there is an act involving trampolines. At first, it seems scary and impossible to do, but their fearless attitude leads them to perform unrealistic jumps while using the futuristic backdrop as a diving board and landing pad. The crowd loved this segment.

On top of a solo aerial hoop act, unique juggling, and artists performing tricks with diabolos, there is a thrilling hoop diving portion. Involving numerous performers, the hoop diving spectacle sees the acrobats jumping back-and-forth through a set of hoops. Occasionally, the hoops spin, which makes it more fun to watch.

After a joyful clown parody, “Dralion” closes with world-class rope skipping. This group of acrobats utilizes ropes while jumping in separate individual efforts, but they build pyramids and towers (performer on top of performer, etc.) to formulate collective jumps as well. No wonder this is left as a closing act; it’s vibrant and naturally rich in entertainment.

“Dralion” provides a diverse look at Cirque du Soleil’s concept of circus-like amusement, and everyone’s wardrobe is beyond beautiful – that makes the performance even more enjoyable and pleasurable. Overall, “Dralion” is utterly wonderful.

Beginning with Wednesday (Oct. 24) night’s opening show at the Citizens Business Bank Arena in Ontario, the piece is scheduled to run until Sunday, Oct. 28, as seven performances are delivered at this Inland Empire location. But “Dralion” is making its way to Long Beach, too, for an additional six times, starting on Thursday, Nov. 1, and ending Sunday, Nov. 4, at Long Beach Arena.