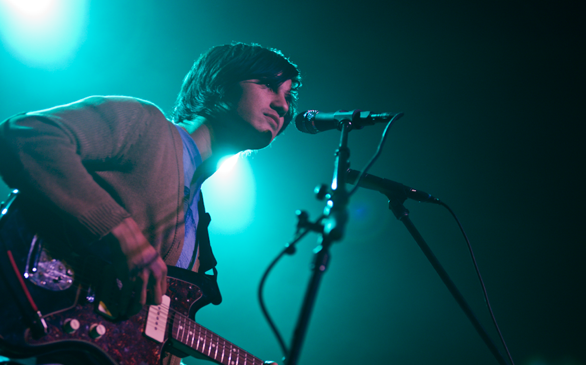 The Dodos gave a great performance...well, while it lasted.
(Credit: Tamea Agles)

The Fonda Theater was once The Musicbox, and I had not visited since the change. I was happy to see the Dodos and thrilled to get back to a favorite venue as I walked through Hollywood to the show in a very windy part of town. The Dodos were first introduced to me about a year ago and had been a band on my list to see live. My night at the Fonda, though, was cut short by the power outage caused by the Santa Ana Winds.

The Fonda was more subdued than most nights I had been there. A smaller and calmer audience greeted me, though I do not see that as a bad thing. It was nice for a date night or a quiet night out with friends. The music itself was lovely and skillfully produced by The Dodos and their headliners, Calexico. Calexico’s set was only one song, but I’ll get to that bit in a second.

The Dodos said very little to the audience, which took up a half house of the Fonda. Obviously fans, the crowd cheered when Meric Long and Logan Kroeber took to the stage. During their set, they played a new song that was introduced as a work in progress. Particularly, the drum solo in the song impressed me, and the audience took to it also. Little to no audience banter from the guys, Long quickly thanked everyone for coming early and introduced the band before quickly transitioning into another song.

The crowd was very mellow, made up of mid-20s couples swaying together, and the older record exec-looking men that seem to go to every show and calmly analyze what is going on around them.

The Dodos got through what I believe was most of their set before the lights went out, and all we had to illuminate our surroundings were the emergency exit lights. We thought for a moment that the lighting for the set had changed up! I thought maybe that the band was going for a moody close to their set. However, it was not a moody transition; the band said nothing and walked off the stage. After waiting a few minutes without instruction, we were happy to see a stagehand come out and tell us to wait for a little while for updates. Everyone stumbled around in the dark for a few minutes, holding cell phones as flashlights. Most people sat along the wall and waited in hopes that the Dodos would return. Sadly their set did not continue.

Calexico though, did come out to the stage for a quick song without the use of any electricity. The band offered a sincere apology, though it was not their fault, and a promise to return before heading back to the very dark backstage.

While The Dodos are not much for audience banter, they make for a perfect night out and a lovely date. You are meant to hear the music live, and they beautifully present it. I hope to someday see a full set, sans the Santa Anita Winds.