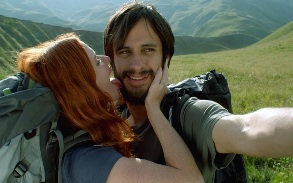 Nica and Alex are a couple in love until something tears them apart.
(Credit: Inti Briones )

It can be hard to accept that we are alone even when we are with someone. You would think that being with the one you love would make you feel complete. However, even those in the closest relationships sometimes feel lonely. That is how the characters Alex (Gael Garcia Bernal) and Nica (Hani Furstenburg) feel in The Loneliest Planet.

The film follows the couple, which is engaged, through the Caucasus Mountains in the country of Georgia. While trekking through the mountains with their guide Dato (Bidzina Gujabidze), they experience the wilderness in all its beauty. But one incident shatters their whole world.

The cinematography was amazing in this film. The geological wonders in the mountains are wonderful to look at as the backdrop to the story. The mountains, grasslands, rivers, streams and rocks are characters themselves and essential to the story. They provide the scenery of the three characters that, in the beginning, are walking close together until the incident tears them apart.

Alex and Nica seem to have a great relationship in the beginning of the film. They are intimate in the most loving way. They hug, kiss, smile and walk together everywhere they go in the village. The two of them practice Spanish with Alex, giving Nica a verb to conjugate to help her learn his language.

However, a situation with a local man causes them to lose their trust in one another. They also lose trust in Dato for a moment.

The character of Dato was fascinating to watch. He leads a lonely life taking people up the mountains, and he even confesses to Nica that he likes being in the mountains alone with nature. His story is also a sad one. He tells Nica the story about his wife, who left him for another man and took their son to another country and later died in a car accident.

While drinking around a campfire, Dato tells Nica this sad story and the unthinkable happens.

The ending was fascinating. After the betrayal, the three of them pack up their camp as if nothing had happened.  It seems as if the writer wanted to have an ending that left people wondering: What will happen next to all of them? Is everything all right between Nica and Alex?

It is interesting to see Alex and Nica, who are nice people, question themselves and each other after they do “bad things,” according to some people. This, I feel, is what Loktev wanted all along.