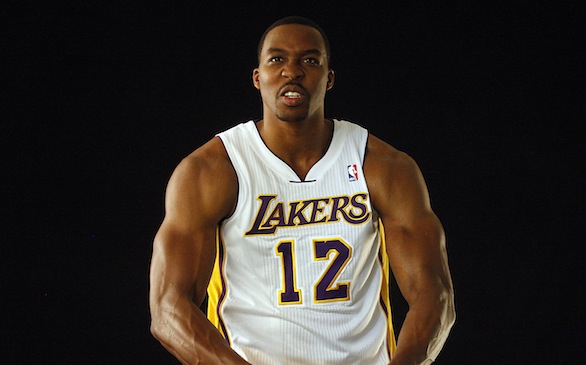 Dwight Howard could be the missing link for the Los Angeles Lakers to reach the NBA Finals.
(Credit: Luis Sinco/Los Angeles Times/MCT)

The Lakers have a lot riding on this season and have more than enough weapons to bring another championship to Los Angeles. With a built-up bench and a strong starting line up, the Lakers figure to be the team to beat.

Ironically, so far this pre-season (0-7 as of Oct. 24) the Lakers have been anything but dominant, but they are using this time wisely to develop their bench, which will probably make the Lakers successful in the long run.

Aside from the big stars (Dwight Howard and Steve Nash), the Lakers acquired Antawn Jamison and Jodie Meeks, re-signed Jordan Hill and picked up Darius Johnson-Odom and Robert Sacre in this year's draft.

Jamison was a good pick up for the Lakers, as he will provide relief for Pau Gasol and put up some good numbers. Last year he averaged 17.2 points and six rebounds a game. His productivity off the bench will be a definite improvement from last year, when the Lakers bench was the worst in the entire league. To put things in perspective, Jamison's 17 points a game is just three points off what the Lakers entire bench averaged last season. On the other hand, Jamison isn't known to be a good defender, but his ability to significantly score baskets overshadows that. Although Jamison shot 40.3 percent from the field in 2011-12, his high shot selection needs some work.

Meeks is Kobe Bryant's back up and as much as we think he can't keep up, he should be able to be a solid option when Bryan is on the bench. Despite his stats showing an average of 8.4 points and 2.4 rebounds a game, that doesn't do justice to what his importance will be to the team.

Last season, the Lakers struggled from behind the arc, but this year they have players that can boost the team's outside shooting. Statistically, Meeks can be the Lakers second best outside shooter after Nash - last season he shot 36.5 percent on three-point shots.

The re-signing of Hill was a crucial move for the Lakers. His defensive performance and energy off the bench was duly noted last year. Look for Hill to continue rebounding and blocking shots at a high rate this season. His defensive skill might even make up for the lack of defense from Jamison and Nash. The only problem is that Hill only started in five regular-season games and 12 playoff games last year. Although he played well in those games, the sample size isn't big enough to determine if Hill will be productive the entire season. It remains to be seen.

Looking at the rookies the Lakers picked up this season, Johnson-Odom is another player that the Lakers can use as an outside threat. During his career at Marquette University, he averaged 15 points a game and shot 40.2 percent from the three-point line. Unfortunately, his talent has not transferred over. During summer league, Johnson-Odom struggled to find playing time and averaged just below five points a game.

Lastly, we have Sacre. The 7-footer from Gonzaga has been making his presence known during pre-season. Versus the Utah Jazz, he had nine points, three blocks and 10 rebounds. He’s a good team player and a good option to go to while Hill recovers from his injury. If Sacre does make the team, he will have trouble getting playing time - particularly because Howards seems healthy enough.

For more information on the Los Angeles Lakers and their 2012-13 season schedule, click here.