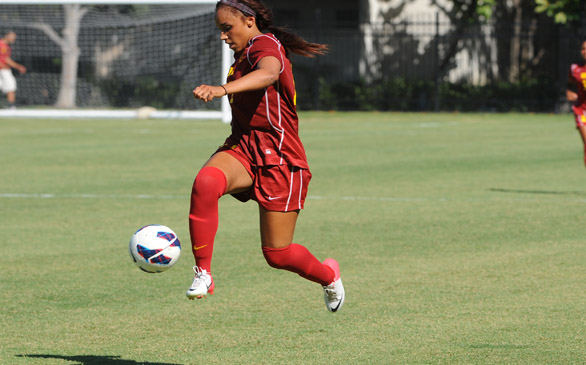 Leadership sports several meanings to numerous people. But for senior Samantha Johnson, it’s down to the basic principle: leading by example.

On the field, she’s vocal, physical, aggressive and a force to reckon with offensively. Off the field, she’s fun, home-bodied, sleeps and eats as often as possible and executes scholarly tasks.

That’s who Johnson is: an all-around leader.

“I just do my thing, and I try to lead by example,” she said.

“It’s really her personality and her competitiveness in wanting to win,” said teammate and roommate Kristina Noriega, who is a senior also. “She does her best everyday. And she wants to bring that out in everyone.”

This 2012 season has not been ideal for the USC Trojans women’s soccer team, which carries a 5-8-3 overall record (as of Oct. 25) that features a Pac-12 mark of 2-4-2. Despite that, Johnson and her teammates have battled until the last second to capture victories.

“It’s been a rollercoaster because we lack experience. But at the same time, I credit the freshmen for learning so quickly. They’ve had a lot of pressure all year,” she said.

And some of that pressure comes from Johnson. She mentioned that she puts pressure on all her teammates, not just the freshmen – particularly because it’s a short season, and the seniors want to optimize their time and effort.

This season, Johnson is tied for the team-lead in goals scored with four, including two game winners. She also places in the top 10 for total shots (43) and shots per game, averaging 2.87.

“I don’t have that mentality to just go to goal, go to goal,” Johnson said. “I tried to be in the right place at the right time.”

On Sept. 21, she collected the game-winning goal against the visiting Washington Huskies in overtime, helping the Trojans propel to a 1-0 win in their Pac-12 opener. Since then, the Trojans have suffered four losses and gained two ties; they’ve won once. Nevertheless, that doesn’t mean Johnson’s lackadaisically awaiting the year’s most important match.

The Trojans host their archrival UCLA Bruins on Senior Day (Nov. 2). It’s also the last contest of the year.

“I think about it every day only because it is the most exciting game, and I have a lot of friends on the UCLA team,” she said. “It’s exciting, but at the same time it isn’t because it’s the end. But I’m excited.”

Johnson is also looking forward to being more risky on the playing pitch.

“I want to take a lot more risks to score goals. I don’t feel like I’m doing that,” she said. “It’s a mindset, and it’s about the attitude.”

Johnson, who is majoring in sociology and with a minor in occupational therapy, grew up in the Palmdale area. She’s been playing soccer since she was 5 years old; she competed in a highly competitive club soccer league and attended Highland High School.

“I really liked USC because it is close to home. I come from a small family, and I didn’t see myself going out of state,” she said. “Also, USC is a good school.”

Interestingly enough, Johnson holds a special record for the program. In 2011, she registered the fastest goal in USC history, netting a score 14 seconds into the affair versus Washington State at McAllister Field on Sept. 25.

Since her freshman year, Johnson has evolved into the player everyone looks up to. According to Noriega, Johnson is an “engine” for the team.

“It’s been a real treat coaching her,” Khosroshahin said.