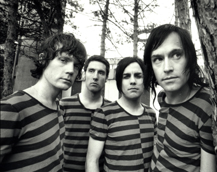 Untitled Document If Dennis Lyxzén had a resume, it might read something like this: Lead singer of the (International) Noise Conspiracy, a vegan punk rocker, left-wing political activist, frisbee golf enthusiast and the sexiest man in Sweden.

"Yeah, but you have to realize that was last year. I’m only number 14 this year," jokes Lyxzén.

Vanity aside, the 33-year-old Swede would prefer people recognize him and his (I)NC bandmates (guitarist Lars Strömberg, bassist Inge Johansson and drummer Ludwig Dahlberg) for who they are: An openly radical, communist rock band – with a new album out called, Armed Love – rather than focus on their so-called "sexy" image.

"Our idea of communism is a full-on functioning real democracy which is something really different that is happening than in those so-called communist countries," continues Lyxzén.

"These so-called communist countries have very little to do with our ideas of adjustment and our ideas of a good world. I don’t see any similarities in China or the [former] Soviet Union as far as my political ideas goes and I think it’s important to make that distinction," says Lyxzén.

Lyxzén’s rebellious stance against capitalism and commercialism may have a lot to do with his adolescent "punk" years. Growing up in a small conservative farming town, Lyxzén found an escape from his ho-hum routine life when he discovered punk rock. The hardcore sounds of Dead Kennedys, Minor Threat and the Clash spoke to him through its political message and DIY mentality.

"That was the cool thing when punk rock first exploded … It was a very diverse sound and a very diverse style and it was all about expressing yourself and doing something different," Lyxzén says.

But, being "different" didn’t come without a price. Lyxzén often found himself misunderstood. School nerds avoided him and testosterone driven jocks accosted him.

It’s a surprising contrast to the mainstream punk rock culture of today where music acts like Avril Lavigne, Simple Plan and Good Charlotte have made the punk rock image and ethos of a once unconventional movement, safe and accessible for nerds and jocks alike to appreciate. "Simple Plan? They look like the jocks that beat me up when I went to school. What the fuck is going on? It was never a popular choice or decision to become a punk rocker when I was growing up. So, for me, it’s kind of baffling," Lyxzén says.

What might be more baffling for (I)NC fans who agree with Lyxzén’s dismissal of modern pop punk bands is its decision to sign with the major label American Recordings. It would seem like a contradictory move for a band who regularly denounces American capitalism, but Lyxzén argues that small independent labels are tied down to the same capitalist system as large companies.

"From day one (I)NC said that we were going to do what we wanted to do. We never promised anyone anything … Anyone who thinks that just because you sign with a small DIY punk label that you’re not part of a capitalist system is kind of naive," Lyxzén says.

There are certain undeniable advantages though to signing with a major label. (I)NC had the opportunity to work with famed producer Rick Rubin and record in the best sound studios that money can buy. Yet, even with these additional perks, Lyxzén is confident the band will continue to maintain their political anti-establishment creed.

"I don’t want to become rock and roll dictator Dennis … It’s not about us being the forefront of the revolution. We’re [just] the soundtrack to it," says Lyxzén.

Armed Love is currently available. The (International) Noise Conspiracy will play Dec. 5 at the Troubadour in West Hollywood and Dec. 6 at Chain Reaction in Anaheim. For more information, visit www.internationalnoise.com.