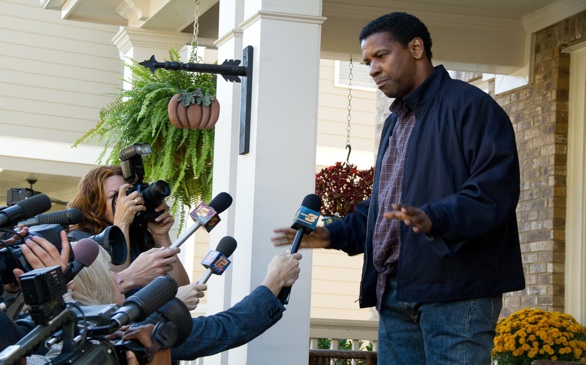 Imagine a worst-case scenario of your plane plummeting to earth in a direct nosedive from thousands of feet. No one really wants to think about that, yet director Robert Zemeckis (Cast Away, Forrest Gump) boldly goes there in his newest film, Flight, starring Denzel Washington. This film takes you on a literal and figurative ride.

Captain Whip Whitaker (Washington), a “functioning” alcoholic, parties hard the night before a flight. Alcohol, a lovely lady and cocaine are his vices. Gearing up the next morning for a flight from Orlando to Atlanta, he faces treacherous weather conditions and ultimately a broken plane mid-flight. He attempts a bold maneuver to save the 102 passengers on board and land the plane in an open field. What follows after the landing isn’t all glory and praise; Whip is forced to take a look at his life… and the consequences all of his actions.

Flight is immediately compelling as Zemeckis recreates one of the most harrowing and graphic descent/crash scenes of any film out there. It’s as if you are on the plane with the passengers; you’re clenching your fists with them. Meanwhile, Whip is snorting lines of cocaine to straighten himself out; it’s almost like he’s eating candy.

Whip is not the usual together kind of guy that Washington tends to play in movies. He is the antihero, and although he bravely tackles a feat under pressure that no one else can duplicate, he is so unlikeable in every other way.

In the beginning of the film, the audience is watching one movie until it moves sharply in another direction.You go on a journey with Whip as he faces (or ignores) his battle with addiction. The other players in the film make him look at himself in ways he may not want to. The transition never feels forced, and the audience remains guessing until the very end.

There was one gratuitous nudity scene that involved a woman; it was a little too long. The audience can easily understand the setup without involving actress Nadine Velazquez, who plays flight attendant Katerina Marquez, to be nude for so long.

Also, there were a lot of competing themes being explored in the film like God, love and addiction. At times, it felt as if there was too much turf to cover.

Overall, Zemeckis makes a strong action comeback with Flight. A great soundtrack pumps throughout the film (it blasted the Rolling Stones at some parts), and it is both visually stunning with a chalk full of strong performances.

However, if you have ever been weary of flying, this movie might not be for you. But if you can stomach it for the first 20 minutes, a lovely and compelling story will unfold.

Flight is in theaters Nov. 2.