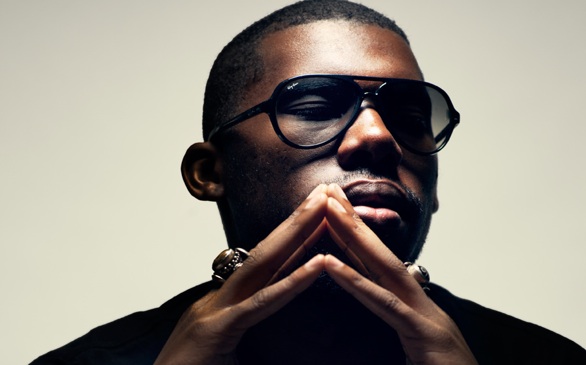 Costumed fans of all shapes and sizes loaded up into Club Nokia on a warm night in October in anticipation for Flying Lotus.

Brainfeeder label mate Gaslamp Killer took to the stage first with his party-heavy mix of dubstep, hip-hop and noise that certainly got the blood pumping as the crowd indulged in Club Nokia’s budget-priced $12 beers.

Straddling the line between party promoter and DJ, Gaslamp Killer did an admirable job firing up the crowd for the night ahead, hyping his label boss’ new album and generally rocking the pretty good as he ran around and banged his head looking equal parts LMFAO and 2004 era Matisyahu.

Up and coming producer Adrian Younge joined the stage next, accompanied by a full band (a prospect that seemed promising at the time given the DJ heavy nature of the bill). Younge’s energetic, instrumental soul music had promise on paper, but the forced nature of the insanely over-produced setup grew tiresome within five minutes. It was (from what I gathered) the debut live performance of the newly signed group, and they seemed to go out of the way to check all the boxes that a fatcat music producer would demand in some crappy cliche knock off of “That Thing You Do.”

Younge, who will apparently be taking on duties as producer for the new Ghostface Killah, definitely has some talent, but the performance was devoid of any real authenticity as the overly orchestrated shenanigans played out on stage.

Gaslamp resumed to the stage after Younge to continue to build up hype as the stage crew brushed the band off the stage and brought in Flying Lotus’ unorthodox setup.

Sandwiched between two screens in front and behind, Lotus took to the stage and wasted no time diving into his bass heavy mix of bizarre electronic as the two screens broadcasted an amazing barrage of psychedelic patterns and shapes that in unison resulted in an A/V setup nothing short of mind blowing.

Lotus (whose 2012 release “Until The Quiet Comes” has been garnering rave reviews) played track after track, blending new and old with his trademark sound that has made him into one of the most sought after producers in the genre. Word has it that Lotus trucked in extra subwoofers to keep listeners at bay, and that certainly seemed to be the case.

Extra kudos for some original remixes to the tune of “N****s In Paris” and others that spiced up the set from his normal spaced out psychadelia. If the billows of aromatic smoke and rampant cheers were any indication, the crowd seemed to approve. Lotus, who’s seemingly grown more and more comfortable on stage, took time out of his set to come down and thank attendees, a move that was appreciated in the increasingly impersonal genre of electronic.

Set to embark on a massive world tour in support of his latest release, Lotus certainly has his hands full.  With a new, groundbreaking visual setup to collaborate with his music, it will undoubtedly be the show to catch for his dedicated and enthusiastic fan base across the globe.