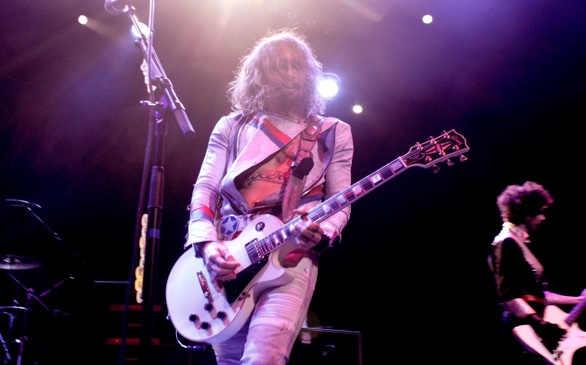 British rock act The Darkness, known for its eccentricity, blissful energy and supreme dynamism, brought its A-game to Club Nokia.

No over-the-top pyrotechnics were needed for the act that resembles the group Queen (that is, if it was an '80s hair band). Its simple good humor, warm interaction with the audience and  perfectly executed sound made this one concert to remember.

LA Live was not full to capacity, but everyone was in a state of euphoria. There’s no way you can refuse the catchy hooks and vigorous energy. The band, that just released Hot Cakes (the follow-up to its 2005 release "One Way Tcket to Hell and Back"), performed most of the tracks off of its debut album.

Its debut album, Permission to Land, put the band on the music radar and has been its most successful album to date. “Every Inch of You” and “Everybody Have a Good Time,” both off the new album, carried the same feel-good vibe as the previous record, and it allowed frontman Justin Hawkins to show-off his singular voice. The band also offered an exquisite cover of Radiohead’s “Street Spirit,” which is found on its latest album.

The singer entertained the crowd with his energetic persona and kept everyone engaged until the end. His chronies Dan Hawkins (guitar, backing vocals), Frankie Poullain (bass, backing vocals) and Ed Graham (drums) looked as fantastic as their fearless leader, and they hit every note like clockwork.

“Have you ever felt anger and sincere rage? I know I have,” said Justin before bursting into the crowd favorite, “Get Your Hands Off of My Woman.”

Clothed in his trademark bodysuit, wearing blue eye shadow and scraggly long hair, he strutted around the stage belting out hits like “I Believe in a Thing Called Love,” and his unique falsetto voice melted the audience like butter over hot cakes. Throughout the show, the band invited the audience to sing along, and the crowd gladly obliged.

That night. the band’s performance was being filmed, the band took full advantage to entertain its fans.

“Why is it when you’re on the tely (television) it all goes bad?" joked Justin as he attempted to bounce guitar picks off his foot and into the audience.

It's easy to see that the band that disbanded for more than half a decade is back with its original members and original magic. The group’s performance in L.A. demonstrated that there are now wiser, louder and equally awesome.