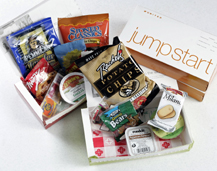 Untitled Document Dining on an airplane these days is like hitting a convenience store.

On most domestic flights, the most substantial meal you’ll get is a collection of snacks you might buy at 7-Eleven – cheese spread, crackers, cookies, chips and maybe, in a nod to healthy eating, a tiny box of raisins. It won’t be free.

On longer flights, a few airlines sell fresh sandwiches and salads, but you won’t often get that option. Hot food has all but disappeared in coach.

Some airlines still hand out free cookies or crackers and processed cheese spread. But on most flights, if you want more than peanuts, you’ll have to pay for it. The notable exception: On international flights lasting more than a few hours, most airlines still serve a complimentary hot meal.

The Miami Herald assembled a panel of food, wine and travel experts to taste food offered for sale on domestic flights out of Miami and Fort Lauderdale. The airlines provided the food.

The panel’s conclusion: Skip the convenience store cuisine. Most of the time you’re better off packing your own lunch – you can bring food aboard – or eating at the airport.

In general, panelists said, the airline food is fairly priced, and many of the items like cookies and chips are public favorites. But often the snacks are too high in salt, sugar and fat and too low in nutritional value to stand in for a meal.

The panel tasted products from five airlines that sell food on flights out of South Florida: American, Northwest, Song, Spirit and United. The only airlines that did not participate were America West and US Airways, whose vendor, LSG Sky Chefs, refused to provide samples.

The overwhelming favorite was Song’s gourmet sandwiches and salads. American, Northwest and Spirit each had at least one snack box panelists said they would buy for themselves and one from Song that they would buy for their children, but tasters said they were unlikely to buy other snack boxes from Song or United. They liked Northwest’s and Spirit’s raisin-nut mixes, but not a sugar-added dried-fruit mix offered by Spirit.

The panel did not sample free airline food, most of it light snacks. Southwest – best known for its peanuts – provides one of the most substantive free snacks, a batch of cookies and crackers, on flights longer than two hours. Delta offered the least, no more than two snack items even on long flights.

‘‘Continental sets itself apart by providing amenities that other airlines don’t want to spend money on,’’ the company said in a statement. ‘‘We don’t want to nickel and dime our customers for food, nor take away essentials like pillows and blankets.’’

Prepackaged food for sale didn’t just fly in overnight. It arrived as part of a series of changes in in-flight food service as airlines struggled to cut costs. Airlines first substituted cold sandwiches for hot meals. Then some airlines stopped providing free food and began selling it.

Now, most have discontinued selling fresh sandwiches and salads on all but the longest domestic flights and replaced them with snack boxes – a mix of nonperishable snacks that cost $3 to $5.

‘‘You know, there are just so many other places I’d rather get ripped off,’’ said Michael Bloise, executive chef at Wish on Miami Beach and a panel member, after sampling an array of cookies, chips and trail-mix snacks.

‘‘Many of the products we tasted were stale,’’ said Linda Gassenheimer, a Miami Herald columnist and cookbook author and another panel member. ‘‘When I go on a flight at mealtime, I’ll stop and pick up some sushi or a sandwich on the way, or at the airport I’ll buy a salad to go.’’

United’s $5 snack boxes have one or two items more than the others, but the contents are similar to the others. One had a fruit cup, cheese spread, cereal bar, bagel chips, trail mix and biscotti; another had potato chips, applesauce, salami, cheese, crackers, cookies and Gummy bears.

‘‘If I had forgotten to pack food, was hungry and had a long flight, I would buy any of them but eat selectively – which would make it a terrible value,’’ said Kathy Martin, the Herald’s food editor.

But there were bright spots. A small fruit and cheese plate, a jerk chicken sandwich and a ham-and-pineapple cream cheese breakfast sandwich sold by Song – Delta’s low-cost carrier – were big hits.

‘‘When I judge food, I look for quality ingredients, and Song’s line was impressive,’’ Bloise said. ‘‘Most of the food was better than the counter food at the airport.’’

That was the case for Jane Wooldridge, the Herald’s travel editor, who bought an American snack box ($3) after a series of delayed flights.

‘‘Packaged food isn’t something I normally eat,’’ she said. ‘‘But I was really hungry, and given the circumstances, the snack was well worth $3.’’