Now, It's Time for Las Cafeteras 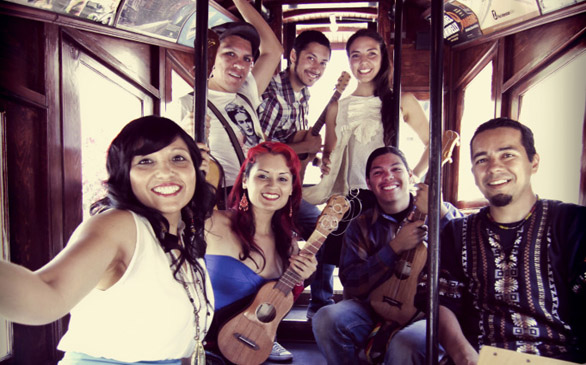 Rest assured that they don’t make coffee. Rather, Las Cafeteras produce music through a fusion of rhythms and elements, while incorporating profound messages in tunes.

Las Cafeteras (The Coffeemakers – from a  feminine standpoint) never figured to get to this point – an album release (It’s Time, which is now available), live music performances, handing out interviews to the press, taking pictures and signing autographs for fans, among other things. But they’re here, nevertheless. And they have a diverse music style that’s both energetic (sounds) and inspiring (lyrics).

It started in the mid-2000s, when each person took and enjoyed music classes of son jarocho at the Eastside Cafe in El Sereno – a neighborhood located East of Los Angeles. The Mexican genre of son jarocho, considered to be regional folk music, comes from Veracruz; Las Cafeteras are paying homage to it.

Just like their sounds and lyrics, their instruments are distinctive: the jarana (harmonic base) and requinto (higher pitch) are small-shaped guitars (Mexico), the cajón is a box-shaped percussion instrument (Peru), and a marimbol is another percussion aspect made out of wood and transformed into a box with a sound hole cut in the center of it.

An instrument of German descent, the glockenspiel consists of a set of tuned metal plates; they’re played with a pair of small hammers. Moreover, Las Cafeteras sport the quijada (Afro-Peruvian), which is typically made out of a donkey, horse or zebra’s jawbone.

The ensemble also performs zapateado (Mexico’s version of stomping) while performing live in front of audiences – just as they did in a packed 13th annual “Dia de Los Muertos” festival at Hollywood Forever Cemetery on Oct. 27.

Campus Circle had the opportunity of conducting an exclusive interview with Las Cafeteras’ members David Flores and Jose Cano. Here is what they had to say:

Campus Circle: Tell us about the artistic group name. How did it evolve into “Las Cafeteras”?

David Flores: It was adopted since the community gave it to us, which was kind of cool. We come from a space called Eastside Café. It’s an arts and culture center in El Sereno where we learned how to play. We used to be 20-deep and while we played, people would walk by and say, “Hey, those are the cafeteros.” That’s how it stuck. We had a lot of women [in the group], so we wanted to keep the feminine identity because the Spanish language is very machista at times.

CC: How and when did Las Cafeteras become a group?

Jose Cano: “It was never really set out to become a band. We all just began taking [son jarocho] classes. We became a band about three-to-four years ago because even then, we were struggling and thinking if ‘we were inclusive or a performance group.’ That took a while for us to really digest because the music of son jarocho isn’t on the stage; it’s like a community thing.

DF: We are a wide array of folks. There are seven of us, and we all have all kids of different influences from oldies to Rage Against the Machine to Weezer to Lila Downs to Manu Chao to Ozomatli. We are all over the map. Most importantly, good people influenced us. People that are good, but not necessarily as musicians but folks that play and jam together like community people. That’s the way son jarocho is.

CC: Elaborate on the meaning of your debut album’s title, It’s Time.

CC: What about the process of making the album? How was it?

JC: We did it in three different recording sessions. The whole recording from the mastering to the mixing to the rehearsing and all that took about nine months. By the time we started, we really had the CD finished. We wanted to take our time. We weren’t trying to rush it. We wanted to feel comfortable and do it right.

CC: What’s behind the lyrics of your first single, “La Bamba Rebelde”?

DF: We see it like a Chicano anthem. It’s “La Bamba;” it went through Ritchie Valens, who was Chicano from Pacoima (in the San Fernando Valley). It kind of fell on us. We didn’t find the music. The music found us…it’s an international song. To us, it’s a privilege to be able to fall into that legacy of doing “La Bamba” with a new generation of folks. We identify it as a Chicano anthem while using the South Veracruz music of son jarocho. We feel great about it. It’s very us. In “La Bamba Rebelde,” you can see that cultural movement happening in East Los Angeles. That’s what it is.

CC: For whom do you create your music?

JC: The music is for everyone. When it comes down to human nature, we all want similar things: we want to live in peace, be happy and healthy, etc. Our intention is not to call down to one crowd. By all means, we want everybody to share the beautiful feelings, to love and eat healthy, and all that. It’s definitely for everybody [in the world].

DF: Also, we were very intentional in not defining what “it’s time” for. Just like the name of the album, It’s Time for you to decide what it’s time for…it’s time for us to make that call. It’s really for everybody.

CC: With its unique set of instruments and lyrical composition, Las Cafeteras fuse several rhythms along with zapateado and spoken word. Is it difficult or easy to transcend this style of son jarocho?

JC: When we get together to write songs and decide what we’re going to do with them, for us the main focus is putting out what we feel we want to share in terms of lyrics. Really, in the way that it’s written and sung, it’s all from the heart. It’s our sincerity that’s put out there. For whatever reason it is, people like it and people respond to it during the shows. We just really are putting ourselves out there; it’s from our hearts. That’s why we are so happy when we are playing live [in front of a crowd]…it happens all the time. That’s what we do. That’s what Las Cafeteras does.

CC: What’s the group’s agenda for the rest of the year?

JC: We’re going to Ensenada and Rosarito in about two weeks. That’ll conclude the bulk of our summer. I think the next big stop we have early next years is South by Southwest (SXSW).

DF: We’ve been touring all summer, and we will end around Thanksgiving Day. We are going to re-adjust and start planning for next summer so that we can visit places we haven’t been to and really spread this message, [It’s Time].

CC: What advise could Las Cafeteras tell the kids, current college students and young adults attempting to reach a career in music?

JC: None of us have degrees in music. None of us really set out to be playing on these beautiful stages in front of large crowds. Nevertheless, it happened. And the reason that it happened is because we found each other; we have different talents and skills. But, first and foremost, we have heart. That’s what we put into our songs and music. We do this because we love doing it. If we didn’t play on stages, we’d still be playing. [They] need to do everything and anything from the heart. That’s ultimately the most important and what’s going to make you happy.

CC: Overall or in general, is there anything else Las Cafeteras would like to add?