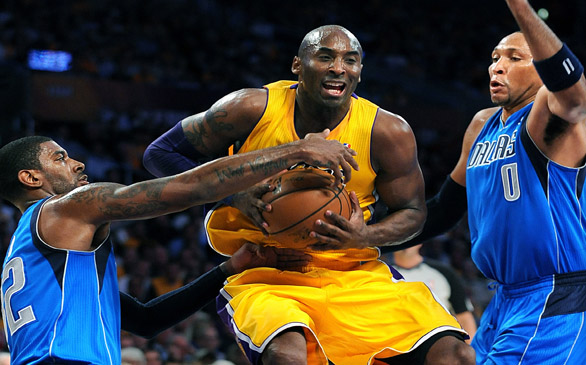 With this season and the next still remaining on his contract, Kobe Bryant has no time to waste and no time to wait. His time for another championship is now.

The Los Angeles Lakers know that their window with Bryant is a coming to an end. Despite not yet showing signs of wearing down physically, the 34-year-old enters his 17th season in the NBA as one of the best players in the league. The Lakers know that, which is why they eventually acquired point guard Steve Nash and center Dwight Howard, among other solid pieces.

But an uncertainty remains. Can and will head coach Mike Brown guide the squad to the NBA Finals? After the Lakers suffered an opening night defeat, 99-91, to the visiting Dallas Mavericks at Staples Center on Oct. 20, the answer is no. However, 81 games are left in L.A.’s schedule, and they can only get better from this point on.

Bryant finished with a solid 22 points on 11-of-14 field goals despite playing with a foot injury. Pau Gasol contributed 23 points, 13 rebounds, six assists and three blocks. Howard added 19 points and 10 boards. But where was Nash throughout the night?

And that falls on Brown, who couldn’t win a championship with the best player in the NBA in LeBron James and won’t win one with the future Hall of Fame inductee in Bryant.

Back when Brown was hired, I never understood it. I still don’t. He’s supposed to be this defensive genius who gets the best out of players, but we didn’t see that last year nor in the first game of this season. In fact, it seems as if the Lakers truly need a lot of work on the defensive end. They were outplayed by a group of Dallas players who are all mostly new to each other as teammates…the same goes to most Laker players.

Many cite that their poor offensive execution and often-lackadaisical defensive effort was due to a lack of cohesiveness and chemistry. I don’t believe that was the problem against the Mavericks. To me, it appears that Brown really doesn’t possess the leadership material necessary to lead this group.

On both ends of the floor, the Lakers never seemed to establish a rhythm.

Offensively, despite all the talent, the Lakers showed signs that they need a lot of work. It’s simple: The Mavericks scored more points than the Lakers, which means that their offense was more efficient and effective than that of L.A. Give credit to Rick Carlisle, though. He led his team to a victory without having his star player, Dirk Nowitzki, and starting center Chris Kaman.

Deep down in his heart, I believe Bryant’s still unease about Brian Shaw not succeeding the best NBA coach ever, Phil Jackson – who probably watched last night’s game and smirked back and forth from beginning to end if he actually saw the entire four quarters of play. I’ve a hunch he did.

If the Lakers under produce come the All-Star break, I wouldn’t be surprised if there is a change in the head coach position. Will Jerry Sloan, Jeff Van Gundy or Kurt Rambis receive a call? I don’t know, but I don’t see why not.

We’ll see. One thing is certain, nevertheless, Bryant deserves better. His time is now. Not tomorrow. Not next season. Now.