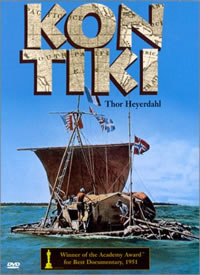 On the evening of Nov. 7, the focus will be on nature documentaries. The first film to be screened will be 1951’s Kon-Tiki, which follows the 4,000 mile-voyage of anthropologist Thor Heyerdahl from Peru to Polynesia. Next on the list will be the 1952 feature-length doc The Sea Around Us, which is adapted from environmentalist Rachel Carson’s book about the world’s oceans.

Two documentary short-subject winners will also be screened: Benjy (1951), a fictional tale of a crippled boy which was used as a fundraiser for the Los Angeles Orthopedic Hospital; and Neighbours (1952), which uses "pixilation" to create an allegory of war. And while the latter two films won Oscars in the documentary category, they clearly would be competing in wildly different categories if entered in the competition today.

The Linwood Dunn Theater is located at the Academy’s Pickford Center for Motion Picture Study, 1313 Vine Street, in Hollywood. Parking is available behind the building through the entrance on Homewood Avenue. Tickets for individual screenings in the "Oscar’s Docs" series are $5 for general audiences and $3 for students with valid I.D. Doors open at 6:30 p.m. For more information, call (310) 247-3000 ext. 111 or visit www.oscars