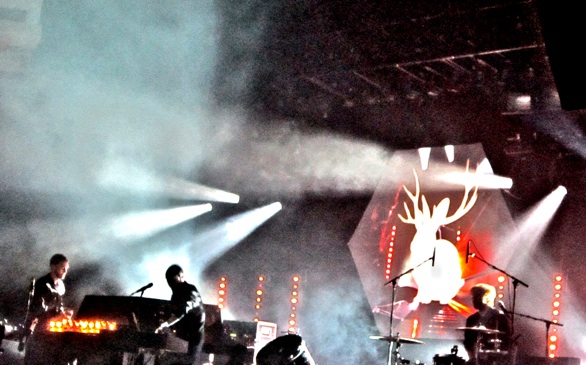 It’s hard to believe that it’s only taken three years for Miike Snow to go from indie pop upstart to synth rock giant.

For proof of that, you only had to look inside the Hollywood Palladium on a Tuesday night as L.A. residents packed the historic ballroom for the Swedish trio’s final show of its fall tour.

And with Halloween just hours away, plenty of fans came ready to party. Some donned their costumes. Others slapped on face paint to celebrate the occasion. There were even a few diehards in the crowd who offered their best jackalope look, sporting bunny ears and antlers in honor of the band’s album artwork.

By 9:30 p.m., there wasn’t much room left on the dance floor or in the balcony areas for those still arriving. But opening act Niki & The Dove wasn’t exactly wowing the crowd either, so many skipped out on the Swedish indietronica trio to wait in line for a drink.

When Miike Snow finally took the stage roughly an hour later, it received a stream of cheers from across the room. It opened with the first two songs off its second studio release, Happy to You, as fans immediately joined vocalist Andrew Wyatt in crooning the words to “Enter the Jokers Lair” and single “The Wave.”

Singing and clapping from the audience would become a trend throughout the band’s one-hour, 15-minute performance, particularly when it transitioned to material from its self-titled debut album for the third song of the night, “Cult Logic.”

For the six songs that ensued, Miike Snow traded off between both old and new tracks. The marching drum line that opens “Bavarian #1 (Say You Will)” got some stomping their feet in rhythm, and favorites like “Burial” and “Silvia” had others singing their hearts out. But “Pretender,” the third single off Happy to You, served as one of the show’s biggest highlights, igniting a dance party that lasted from the first note to the very last.

Miike Snow didn’t let its foot off the gas pedal after exposing the band’s sentimental, psychedelic side on “God Help This Divorce,” breathing even more life into the crowd with big hits such as “Black & Blue” and “Paddling Out.”

While Miike Snow returned to its roots for a two-song encore after a short break, it would encounter sound problems during the outro portion of “Sans Soleil.” Wyatt quickly cracked a joke at its conclusion, announcing to the audience they would be giving away that version of the tune as an mp3. Coincidentally enough, it wasn’t the first time Miike Snow had experienced technical issues in Los Angeles — a faulty speaker system interrupted the sold-out show at The Wiltern back in 2010 after only 45 minutes.

But once the decibel levels returned to full strength at the Palladium, Miike Snow closed with the song everyone had been anxiously awaiting: “Animal.” The crowd erupted one last time as the band’s synthesizers crescendoed, leaving fans with the perfect opportunity to unleash the beast within them before heading home for the night.