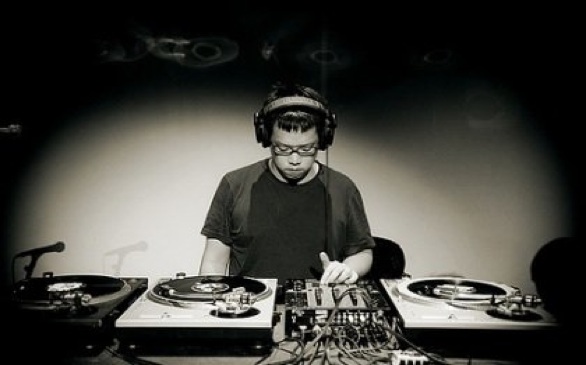 It’s becoming harder and harder these days to find a DJ who doesn’t plant himself behind a laptop for two hours while he allegedly works his magic on a crowd.

But Canada’s very own Kid Koala — formally known as Eric San — is one of those remaining few who haven’t let the digital age compromise their brilliant work on a set of turntables.

Those who made it out to Echoplex on Thursday night witnessed that first hand, as San brought neither a computer nor a pair of headphones with him for his first show in L.A. since 2010.

Kid Koala, who has collaborated with some of the finest names in the business between Amon Tobin, Lovage and Gorillaz, is also a member of the alternative hip-hop super group Deltron 3030, which features Bay Area rapper, Del the Funky Homosapien.

Earlier in the night, fans even got to hear some of the project’s latest material as legendary hip-hop producer Dan the Automator previewed Deltron Event II, the new Deltron 3030 album that will be out later this month, while throwing leftover Halloween candy into the audience.

This occasion, though, really belonged to Kid Koala and his new studio effort, 12 Bit Blues, as he laid down track after track from it and entertained the audience with playful puppetry. In addition, the multi-costumed, song-and-dance trio, Adira Amram and the Experience, came all the way from soggy New York City for what would be a memorable performance.

With props galore, it wasn’t hard for San to keep the tone light-hearted from start to finish. Even so, he still made sure to “get weird” at one point during the show before turning to classics like the ska-influenced “Skanky Panky.”

It was clear, however, that San wasn’t just there to spin records. He regularly engaged with fans to not only provide context and insight, but also to share a few laughs. He even had Adira Amram and the Experience give a demonstration on how to assemble the miniature paper turntable that comes inside his new record.

And of course, he explained why he has to wear a koala bear suit for 100 straight shows, too.

He lost a bet with some friends at his record label, Ninja Tune.

Well, that he’s not saying.

But San had more than enough surprises for us from the very start, including a guest appearance from turntable legend Cut Chemist to open his 90-minute set. The crowd shouted in approval as he made the announcement, and before we knew it, the two friends were jamming out to our delight.

The smiles kept flowing from spectators even after Cut Chemist left the decks and Kid Koala went back to his early rock and hip-hop influences with samples of The White Stripes and Beastie Boys.

From there, San dug into 12 Bit Blues, playing nearly half of the album that comes six years after he produced his last, Your Mom’s Favorite DJ.

For those who started listening to Kid Koala’s first mixtape demo back in 1996, it’s been quite the wait.

Because with the way he mesmerized many of us at Echoplex, San certainly shouldn’t take as long to release his next sonic gem.