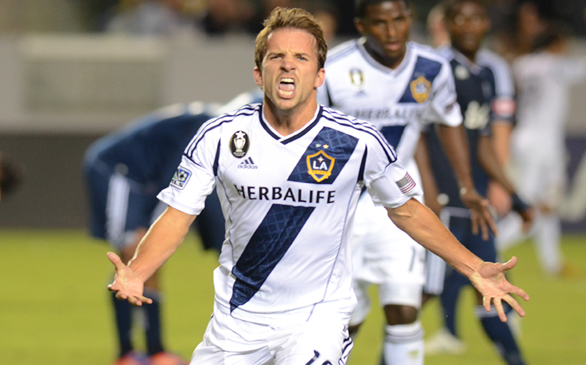 The Galaxy's Mike Magee celebrates his game-tying goal in the second half against the Whitecaps FC.
(Credit: Courtesy of Kyusung Gong)

The Los Angeles Galaxy managed a come-from-behind 2-1 victory over the visiting Vancouver Whitecaps FC Thursday night at The Home Depot Center in Carson before 14,703 fans in attendance.

Midfielders Mike Magee and Landon Donovan each tallied goals in the second half after Los Angeles trailed 1-0.

With the knockout round win, the Galaxy advanced to the Western Conference Semifinals. The next round features two games against the San Jose Earthquakes beginning with Sunday's first leg affair at 6 p.m., which L.A. is scheduled to host.

But it was no easy win. In the first half, the Galaxy came out flat and almost lackadaisical at times. The defense surrendered an early goal to Vancouver's Darren Mattocks, who surprisingly netted a score past the back line and goalkeeper Josh Saunders.

"Yeah, that was our game plan," he said. "To be in that kind of position where we can catch them on the break, and we did it. We had chances to do it again, and we needed to take one of those chances and we needed a couple of other things to go our way."

Throughout the first half, the Galaxy seemed to be somewhat desperate. However, their patience kicked in. Down 1-0 by half time, the team went on to score twice in the second half to capture the win and earn an appearance in the conference semis.

"I think patience was the key tonight," Donovan said. "Certainly not the way we wanted to start the game. Kind of one play broke us down and then we were behind the eight-ball, but our determination was good."

"Well, we got to show patience," Arena said. It’s the kind of game we expected, we thought we’d have a lot of the ball and Vancouver was going to get numbers behind the ball and make it difficult."

L.A. out shot the Canada-based squad 23-9, led by Magee's left-footed volley and Donovan's converted penalty kick. Juninho received the assist on Magee's goal after delivering a through ball, which came to Magee unexpectedly.

"I was thinking don’t do what I did on the one before, put it in the 20th row. My eyes got big," said Magee, who had sent a shot flying high earlier.

Now, their next opponent in San Jose exemplifies a tough task. But it will be fun, Donovan noted.

"My guess is it’s going to be pretty exciting. It’s a team we played really well this year actually," Donovan said.

Added Magee, "They’re a team that in the past couple years have kind of given us fits. They’ve always seemed to play their best against us while we were top of the table and now that the roles are reversed we don’t like them very much either."