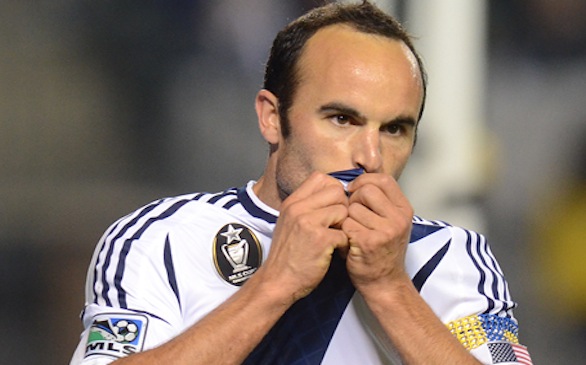 A stoppage time goal by defender Victor Bernardez gave the visiting San Jose Earthquakes a 1-0 win over the Los Angeles Galaxy in the first leg of the Western Conference Semifinals before a sold out crowd of 27,000 at The Home Depot Center in Carson Sunday night.

Bernardez squeezed a shot past Galaxy's wall of players on the right side, and goalkeeper Josh Saunders momentarily lost sight of the ball. When it was all set and done, Saunders almost trapped the leather, but it escaped his hands, crossing the end line and into the goal net.

“My ambition in those types of plays is to always score the goal," Bernardez said. "I lined it up and that’s result we got tonight.”

Saunders wasn't pleased with the outcome of this free kick.

L.A.’s clearest chance at scoring arrived in the 86th minute when Irish forward Robbie Keane one-timed Landon Donovan’s heel pass atop of the box. Keane released a 25-yard strike that hit the left side of the crossbar and bounced back into play. Keane showed discontent with the result seconds after.

“We didn’t really have full chances, we had kind of half chances like off the crossbar," said Keane. "It’s one of those things, obviously disappointed that we conceded, but lucky enough there’s another game on Wednesday.”

Donovan, who played the entire match as a striker, shared the same views as Keane.

“We didn’t have too many great chances but obviously unlucky with Robbie’s, just probably didn’t run hard enough with a lot of the crosses we had, so, we got a number of decent chances and some good attacking play and on Wednesday we’ve got to score,” Donovan said.

At 31:10, Donovan fired a right-footed shot that powerfully rolled on the ground but the Earthquake goalkeeper Jon Busch managed a diving stop.

In the 66th minute, defender Sean Franklin hit a potent 40-yard shot from the mid-right flank that curled its way to the goal, but Busch made a save with two hands. Then, at the 72nd-minute mark, Irish forward Robbie Keane trapped a ball past midfield and carried it just outside the box for a shot. Busch secured the stop.

Beckham wasn't too happy with the loss.

“It’s always disappointing, especially when you have that much possession and we had quite a few good chances as well and crosses," he said. "Especially in the second half we kind of pushed on to them and we were creating chance after chance. If you don’t put one of those away it can always kill you at the end and I think obviously them getting their goal was disappointing. But we can take the positives from the chances we created and the possession that we had.”

Los Angeles and San Jose play the second leg of this semifinal series on Wednesday, Nov. 7, at Buck Shaw Stadium in Santa Clara. The game begins at 8 p.m.

"We obviously have to see how players come through this game. Obviously, it’s been a demanding week and [we’ll] make adjustments accordingly. It’ll be right up to game time on Wednesday,” Arena said.