The New NHL: Thrills and Kills 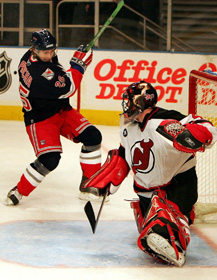 By most accounts, the Ottawa Senators’ frantic 4-3 overtime victory against the visiting Montreal Canadiens on Oct. 27 was nothing short of riveting.

The game possessed the essential elements of hockey drama: skating, scoring, hitting, plus a marvelous overtime goal by Jason Spezza.

Atop the Corel Centre, Senators general manager John Muckler stood in amazement, his eyes misting as he scanned the crowd below. A grandfatherly figure who was part of five Stanley Cup championships coaching the Edmonton Oilers, Muckler couldn’t remember the last time he attended a game where the crowd gave both teams a standing ovation.

"It was a fabulous game," Muckler said. "It was one of the best games I have seen in a long, long time. The goalkeeping was good. Lots of scoring opportunities. Good passing. Shots off the wing. You have not seen that in hockey in the last 10 years.

"In the old NHL, Spezza wouldn’t be able to score that goal. They’d take him into the corner ... and he’d never get to the front of the net. This is so much more entertaining."

Welcome to the "new" NHL – which turned one month old during the weekend.

Love it or hate it – and some purists loathe commissioner Gary Bettman’s new version – hockey is back with a vengeance.

Scoring is up 27 percent, with an average of 6.4 goals per game, compared with five in the pre-lockout season of 2003-04. The first month of the season has seen shooting-gallery games almost nightly.

At the league office, everyone is smiling.

"We have a very fast, exciting, and higher-scoring product, and the fans are telling us overwhelmingly that they love what they are seeing," deputy commissioner Bill Daly said.

But, along with the scoring surge has come a dramatic – and not fully anticipated – change in the way games are decided.

Coaches, including Philadelphia Flyers’ Ken Hitchcock, complain that far more minor penalties are being called to prevent players from impeding the offense. With teams constantly on power plays or shorthanded, the new emphasis is on special teams.

Hitchcock said no one anticipated so many penalties.

"The special-teams game now in the NHL has the potential, on every night, to have a bigger bite in the game," he said. "This is uncommon. It’s never happened before in the NHL."

In fact, a significant portion of the rise in scoring is because of special-teams play, where the man advantage makes scoring easier. Through 182 games, of the 1,164 goals scored, 435 came on the power play. Sixty-five games were decided by a power-play goal.

Five-on-five play, Toronto coach Pat Quinn sarcastically noted recently, has gone the way of "the dodo bird." (Quinn was fined $10,000 for that remark.)

Like other sports leagues, the NHL has had an on-and-off love affair with high scoring. During the 1950-51 season, the average for goals per game was 5.4. Players were smaller and not as fast. The trap – lining up players in formation to impede and "trap" a puck carrier – didn’t exist

Then came the Glen Sather/Muckler Oilers of the mid-1980s. In 1981-82, Wayne Gretzky scored 92 goals under Sather’s philosophy of offense first, defense last. In 1983-84, when the Oilers won their first Stanley Cup, goals per game reached a staggering 7.9.

Then came the ‘90s with Jacques Lemaire’s infamous neutral-zone trap, along with defensive-minded coaches such as Hitchcock and Pat Burns.

Professional hockey players began learning to adapt to the slower game. In juniors, Hitchcock said, players were taught to keep their sticks on the ice and check the proper way. But when they reached the AHL and NHL, the attitude was "just don’t get beat," even it meant using your stick and cheating. Hence, the goal decline.

Now, he said, "You’re asking players to relearn what they were taught 15 to 20 years earlier, and it’s not easy."

The scoring decline combined with a drop in TV ratings, attendance problems in some markets, and growing complaints about obstruction from players as renowned as Lemieux. Then last year came the lockout.

A solution began to emerge during the lockout’s darkest hour between Colin Campbell, the league’s director of hockey operations, and Brendan Shanahan, a member of the NHL Players Association’s executive committee.

As polarized as Bettman and the union were as they discussed a new collective-bargaining agreement, they were in full agreement on one issue: The on-ice product needed radical change.

First, they redesigned the rink, moving the goal line two feet closer to the back boards, creating four more feet of space in the offensive zone.

Now offensive players had more room to work in front of the net. They also moved the blue lines two feet closer to the center red line, reducing the neutral zone to 50 feet from 54. Again, more space in the offensive zone.

The size of goalie equipment was drastically reduced to give players more room to shoot at the net. Restrictions also limit where the goalie can handle the puck, thus preventing "freezing" the puck and stopping play.

Yet among all the changes, the most radical of all – considered heresy when initially discussed by the GMs – was ignoring the red line for purposes of allowing two-line passes. The red line now exists only to determine icing.

Removing the red line for the long pass has produced track meets on ice.

Ignoring the red line has enabled four-line breakaway passes. It’s hockey’s equivalent of the 80-yard, post-pattern touchdown that takes your breath away.

"It’s more open," the Flyers’ Peter Forsberg said. "If you look, the defense is not coming as hard at you because they are afraid of getting beat by you and now they can’t grab you.

"They can’t put the stick between your legs. They are hesitant. This gives you more time to make plays. It’s more open ice everywhere. We have more time to create than we have had in the last couple of years."

League officials recognized that none of these rules changes would improve the on-ice product without full compliance from the referees to eliminate the clutch and grab, hooking and tripping that would typically allow an inferior skating club to gain an even foothold with skillful, quick teams.

These days, Bettman’s officials whistle everything, which makes the game choppy sometimes. Zero tolerance may someday be viewed as having saved the NHL, or reinvented the game, depending upon your perspective.

"I say this with a smile," said Gretzky, the player-turned-owner-turned-coach of the Phoenix Coyotes. "It’s probably been better than they anticipated. The game itself is such a nicer game to watch and be part of.

"I truly believe the finesse and smarts and intelligence of hockey players now, both offensively and defensively, is a factor. If you’re not a good skater and you can’t handle the puck and you’re not a smart defenseman, you no longer can play in the NHL. That’s the way it should be."

Critics suggest the new game has become one of special-teams dominance over even-strength play while physicality – big hits in the corners and at center ice – has disappeared. The crackdown on obstruction has led to crafty players abusing the rules by feigning obstruction or diving, as Hitchcock noted two weeks ago.

It’s also led to frustration among coaches, which gets passed down to the players.

Because coaches taught the use of obstruction as a defensive means to control skill players for the last two decades, it’s likely going to take months to eradicate such practices from the new game.

Gretzky believes hockey once again will thrive in this new environment, as long as the rules regarding obstruction are enforced from October through the playoffs.

"I love the new game," Gretzky said. "I think the new NHL is better than anyone expected. There is still room for physical play and physical presence, but there is no room for unnecessary tripping, hooking and holding.

"I think the officials have been doing a good job making the calls. The bottom line is, a penalty in the first should also be a penalty in the last two minutes of the game, and I hope the league continues to call the game that way throughout the entire season."