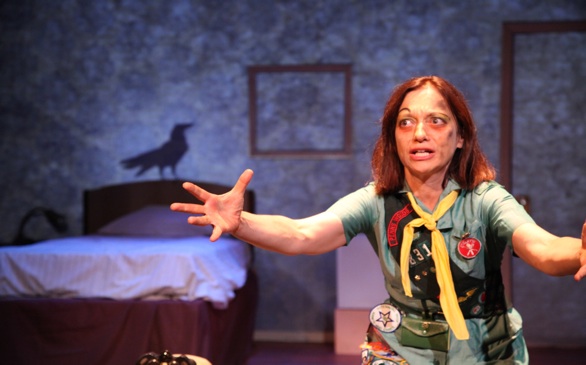 The play will be running at the Bootleg Theatre in Los Angeles.
(Credit: Justin Zsebe)

Life isn't easy for some people. While some follow the traditional route and make it to the mainstream, others are thrown off track. There are ghosts, cobwebs and moss that tend to cloud the view down the road to success. It isn't always obvious why or how to move forward.

The compelling, intense and brilliantly acted tragicomedy, "Death of a Salesgirl," is about one woman’s struggle to free herself from that sort of inertia.

What begins as a monologue by writer/actor Patricia Scanlon, in her best Willy Loman moment of how she plans to "make it," soon turns into a psychodrama about a woman and the man who holds her back. Their relationship is intelligently left vague for most of the 70 minutes until it becomes painfully obvious why this grown up Girl Scout is emotionally and professionally stunted and not quite fitting into the norm.

"Death of a Salesgirl" follows Cat (Scanlon), a struggling salesgirl on her mission to break in new territory. Sales aren't what they used to be, and Cat longs for the satisfaction she once found in “a mutually beneficial, yet heartfelt exchange between two consenting human beings.”

Alone in a seedy motel, Cat succumbs to a suffocating nostalgia that invites in a mysterious visitor, Frank (Paul Dillon). Cat finds herself caught in a surreal world that threatens to suck her backwards unless she can decide to pull away.

Director Matthew McCray incorporated ethereal and haunting video by Adam Flemming and animation by Dan Lund to bring breath and life to a uniquely shifting set by Francois-Pierre Couture. All of this added to a sonar landscape by John Zalewski contributed to the Hitchcockian cinematic sensibilities of each scene.

Essentially, this is a two-man play; Scanlon and costar Dillon are the heart and soul of the small stage. The interaction is a choreographed roller coaster ride through the emotions of co-dependence. Quick-paced movements and vocal dialogues literally have them bouncing off one another and the walls.

I can only imagine how cathartic this work must be for Scanlon. Her intense and bold portrayal is visceral to watch. Catching you off guard after so many humorous lines are spoken, Scanlon's face resonates with years of frustration and deep hidden pain.

Scanlon's career has rightfully garnered rave reviews and a following in New York and Los Angeles. She is the creator of "Hildy Hildy," the theater serial that has attracted fans and talented costars, including John C. Reilly, Laurie Metcalf, Jane Lynch, Kevin Corrigan, Elizabeth Berridge, Joanna Cassidy, Blue Man Group, and many others.

Show times are at 7:30pm, Thursdays through Saturdays until Nov. 17. General admission tickets cost $25; students and seniors are $18; preview tickets are $15.  Tickets will be available online and at the door. Bootleg Theater is located at 2220 Beverly Blvd., Los Angeles, CA.  For venue and ticket information, please call 213-389-3856.