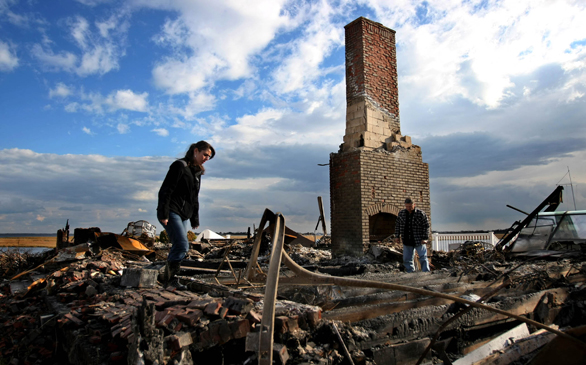 Sal Quartucio, right, and Rachel Krinner, looking for belongings in what used to be their house.
(Credit: Gary Coronado/Palm Beach Post/MCT)

The Rev. Armando Palmieri normally tends to his parishioners at the Shrine Church of Our Lady of Solace, but after super storm Sandy devastated the neighborhood, inundating homes and washing away cars, even some of his priests have come to him suffering from anxiety.

"They don't know what the future will hold," Palmieri said after celebrating Mass on Sunday in a chapel that also had flooded. Volunteers managed to pump out seawater and mud, rip up the carpet, power-wash the floors and clean the stained glass windows, finishing just in time for 200 worshipers to arrive. Power was still out, so the church relied on lamps and ran long extension cords to a power source outside.

The mega-storm that left millions in New York, New Jersey and elsewhere without the basics of modern life - electricity, heat, gas or paychecks - also left many with psychological scars that are less visible but, doctors say, likely to take a growing toll.

Signs of frayed nerves are everywhere. Fistfights have broken out in mile-long gas lines. Some Brooklyn residents are sleeping with knives to ward off would-be looters. Victims of the storm curse the Federal Emergency Management Agency, the American Red Cross, elected officials and anyone else for what they call a slow response to a crisis that refuses to end.

"The psychological impact of this disaster upon New York is immense and will likely increase in the coming days, weeks and months," Benjamin Rosen, spokesman for the New York State Office of Mental Health, wrote in an email.

Shortly after the storm slammed into the city Oct. 29, the psychiatric ward at Columbia University Medical Center filled to capacity with a 30 percent surge in patients, and almost half reported mental health symptoms associated with the storm.

They showed "anxiety and stress over what had happened and how they were going to cope with it," said Dr. Jeffrey Lieberman, chairman of psychiatry at the hospital. The health effects, he said, "will grow over time."

Medical facilities are also stressed, and several major hospitals were forced to evacuate patients when power failed. Authorities closed the main psychiatric center in Staten Island, the blue-collar borough where at least 19 people died in the storm, and moved its patients to facilities in Queens and the Bronx.

The New York Artificial Kidney Center, which provides dialysis for 180 patients in Brooklyn, also had to close. The patients have been moved to other treatment centers.

"These are people whose kidneys are destroyed, who have hypertension, diabetes, they're amputees," said Clara Tarantul, the center's administrator. "The change is extremely stressful for everyone."

Doctors and experts say the storm's aftermath is likely to test the resilience of New York's most vulnerable residents as well as its hardiest, whose seen-it-all nonchalance has endured previous hurricanes, urban violence and the terrorist attacks of Sept. 11, 2001.

But Sandy's geographic reach was far greater, affecting not just parts of New York's five boroughs, but its northern suburbs, Long Island to the east, and dozens of communities in New Jersey and 11 other states. Adding to the stress: Temperatures are expected to plunge in coming days.

Aid agencies such as Doctors Without Borders, famous for working in war zones overseas, have deployed mental health professionals to emergency shelters in Staten Island; Hoboken, N.J.; and other affected areas.

On Sunday, about 660 volunteers in green vests from the Ridgewood, N.J.-based World Mission Society Church of God went door-to-door to check on residents in parts of Queens, Staten Island and Hoboken.

"A lot of people were suffering from depression," said Mike Schardinger, who was leading a team around Hoboken. "But just the fact that people are here to help makes them feel good,"

Some experts said New Yorkers may be better prepared to cope with the trauma than many other Americans.

Many are descended from immigrants who overcame obstacles to reach America and achieve success. That spirit of resilience is part of the city's DNA. Living in New York already requires a high degree of stress tolerance.

"Living in a high-density urban environment - same with Los Angeles - may make you more resilient than, let's say, people who live in Aspen," Lieberman said.