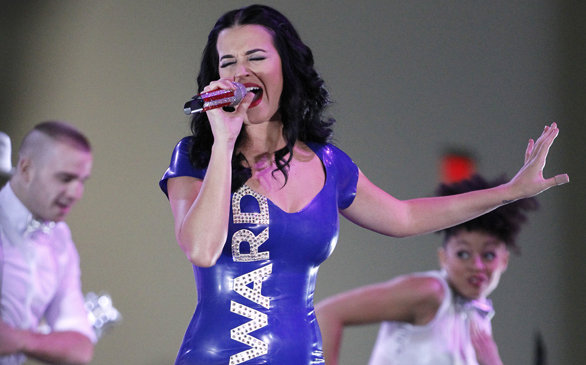 The musical battle between Barack Obama and Mitt Romney heated up recently as Stevie Wonder released a funky new pro-Obama song called "Keep Moving Forward," while Meat Loaf celebrated his support of Romney by belting a goofy "America the Beautiful" practically into his face, thus demonstrating that, yes, there can be ham in Meat Loaf.

Each presidential candidate also has his own theme song - Al Green's "Let's Stay Together" for Obama; Kid Rock's "Born Free" for Romney - as well as respective Spotify playlists of tunes to represent each campaign's theoretical soundtrack.

We've come a long way since "Tippecanoe and Tyler Too."

But songs took on new importance in the early to mid-19th century as property qualifications for voting were eliminated during the Jacksonian era, vastly expanding the electorate to include many illiterate voters.

"The song became a really great way to send out the message among a class of voters that wouldn't be able to read a pamphlet otherwise," said Eric Kasper, coauthor of "Don't Stop Thinking About the Music: The Politics of Songs and Musicians in Presidential Campaigns" and a political science professor at the University of Wisconsin at Barron County.

So it was that "Tippecanoe and Tyler Too" - which celebrated the 1840 Whig candidacy of William Henry Harrison (who had led U.S. forces against Native Americans in the Battle of Tippecanoe) and running mate John Tyler and ridiculed incumbent Democrat Martin Van Buren - was credited by newspapers with singing the ticket into the White House. The song, written by an Ohio jeweler named Alexander Coffman Ross, included multiple verses and a chorus that went: "For Tippecanoe and Tyler too/For Tippecanoe and Tyler too/And with them we'll beat little Van, Van, Van/Van is a used up man/And with them we'll beat little Van."

But as the 1900s progressed and the recorded-music era took hold, candidates became associated with individual songs, such as Franklin Roosevelt and "Happy Days Are Here Again."

"They see this works in social movements to garner support, so they start using these familiar songs," Kasper said.

One of the most successful modern presidential campaign songs is widely considered to be Fleetwood Mac's "Don't Stop," still positively associated with Bill Clinton. A Clinton opponent, Ross Perot, chose one of the odder ones: Patsy Cline's "Crazy."

"I think that just solidified the public's impression that he was exactly what the song said he was," said Benjamin Schoening, assistant professor of vocal music at Gainesville State College in Georgia and the other co-author of "Don't Stop Thinking About the Music."

Bob Dole's "Dole Man," based on Sam & Dave's "Soul Man," wasn't one of the more inspirational ones either.

In 2008, Obama benefited from Black Eyed Peas frontman will.i.am's "Yes We Can," which incorporated candidate speech snippets into a song/video that became a viral sensation. Obama had a variety of other campaign songs as well, including U2's "City of Blinding Lights" and Jackie Wilson's "Higher and Higher."

In Romney's 2008 campaign, he initially wanted to project an image of being a doer, not a talker, so he used Elvis Presley's "A Little Less Conversation" as his main theme. Later he switched it to BachmanTurner Overdrive's "You Ain't Seen Nothing Yet."

The candidates' current song choices reflect the changed climate: Obama's "Let's Stay Together" is less of a hope-and-change message than a keep-the-faith plea, and Romney's "Born Free" could be a tea party anthem. But those songs can't be expected to do all the heavy lifting, so, in a move that Schoening likened to those 19th-century singing campaigns, each candidate released his own Spotify playlist.

"It's something we really hadn't seen come out of a campaign," Schoening said. "You cast that broad net, and in a way it's like free advertising if you can get the public to associate your name with one or a few of these songs when they get some airplay."

Even more songs are played at the candidates' rallies, with the tone often adjusted to the crowd. Do the songs actually make a difference?

"It's kind of like yard signs," Schoening said. "There's no empirical evidence that placing a sign makes a difference, but every candidate does it because it might."

Just know that, come Tuesday night, neither candidate wants to be caught playing the Beatles' "I'm a Loser."