Who Will Be the First Lady of Fashion?

By Jenny B. Davis/Fort Worth Star-Telegram (MCT) 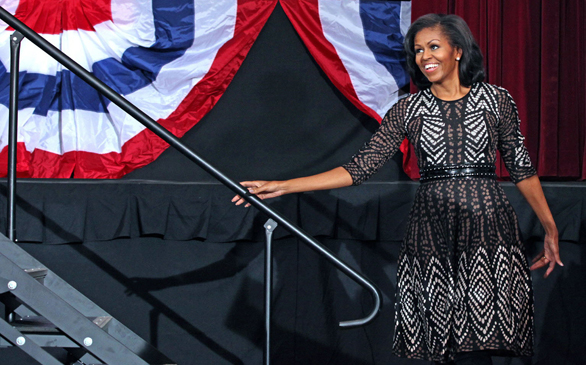 Michelle Obama is known to be a solid dresser when it comes down to fashion.
(Credit: Rick Wood/Milwaukee Journal Sentinel/MCT)

That tradition is likely to continue no matter who wins the 2012 presidential election, for both Michelle Obama and Ann Romney have been dressed to impress at nearly every stop on the long campaign trail.

Yet only one woman can hang her coat in the White House closet. Here's how we cast our votes for election-season fashion.

It's hard to go wrong with red, especially when it's Oscar de la Renta red. At the Republican National Convention in August, Ann took the stage in a clean, classic frock that mixed a traditional, June Cleaver-esque cut with a touch of modernity, courtesy of a bling-accented belt.

It was appropriate, flattering and fabulously telegenic - this was a major broadcast event, after all.

The lone misstep? Her heels. While the peep-toe style was an acceptable option for the summer occasion, we wish she had opted for a color other than black. We'd have chosen a subdued, golden-hued heel that complemented her jewelry, or perhaps a patent-leather heel in a leg-lengthening skin-tone shade (we're partial to the charming bow-topped Valentino Couture Bow Pump).

These options would have been more fashion-forward, allowing all eyes to stay on that divine dress.

We're huge Tracy Reese fans - we love her fresh, innovative take on casual fashion (and it doesn't hurt that she always gives us a good seat at her Mercedes-Benz Fashion Week shows).

Alas, our enthusiasm for this look ends where the actual look begins. While the dress was generally pretty, we think it lacked the gravitas necessary for such an important event. It was more "country club baby shower" than "world-leader wife." We do award style points for pairing the dress with a pair of pink suede pumps from J.Crew, but not even a pair of personally cobbled Manolos could have enlivened this forgettable frock.

There was so much to love about Ann's embrace of this shocking shade of Schiaparelli pink.

Again, the designer was the impeccable Oscar de la Renta, and the textured fabric was fabulously photogenic. Also wonderful was the decision to pair the dress with a double strand of bottle-green beads, which shone like sea glass.

It was an outfit made in heaven - until we noticed the hideous, Miss Havisham-style red and tan damask-patterned shawl around her shoulders. Anne's streamlined, hot pink chic? Destroyed. Not only did that shawl make our eyes hurt, but we were left wondering, will she be reading Tarot after time is called?

Michelle was also haute in hot pink at the town hall debate in October. She donned a Michael Kors seamed crepe sheath dress and matching cropped jacket with bracelet-length sleeves and a sensational, face-framing collar.

Both the color and style were bold, assertive and entirely spectacular. Her jewelry choice - a single strand of cream-colored pearls - was a slight disappointment. Not bad, just meh.

Next time Michelle pulls out this number - and we think she will, as she's a noted dress re-wearer - we suggest she wear something more notable at the neckline, like a statement necklace from New York-based jewelry designer Ranjana Khan or even Vera Wang.

On the campaign trail: power prints

A wrap dress is universally flattering, which might be why Ann chose this colorful, swirl-print Diane Von Furstenberg number while on the Florida campaign trail last month.

We loved the casual necklace, which added a touch of sparkle without interfering with the most prominent design feature of the dress, the V-neck, and we also applaud Ann's decision to wear her hair up, giving her an easy, breezy vibe perfect for the balmy weather.

What concerns us, however, is how the dress looks when the knit fabric clings to every little bump and curve, especially in her midsection. Had Ann simply added a thin pair of Spanx under her dress that day, her figure would have looked much sleeker and smoother, especially in photos. It's a quibble, for sure, but attention to detail matters when the whole world is watching.

Michelle, like Ann, seemed to have hit the local mall to find the dress she wore while campaigning recently in Wisconsin.

The brand behind this chic, tribal-print dress is BCBG Max Azria, a label almost as ubiquitous as DVF. Regardless, we love it.

The muted earth tones of the silk and cotton fabric beautifully complement her coloring, and the fit-and-flare design is a cut she returns to again and again - because it works. But the piece de resistance of this look is the wide leather belt. Michelle is a serial belter - of dresses, sweaters and gowns - and sometimes she gets it right, sometimes she doesn't.

This time, she nails it. And when it comes to attention to detail, take note: One blogger speculated that Michelle may have added an extra panel to the hem of the dress for length. If so, kudos to your tailor, Mrs. O!

Leather is in, in, in, and Ann certainly owned the ultra-edgy look she debuted during a September appearance on "The Tonight Show With Jay Leno." She worked myriad trends here: black, laser-cut leather, plus a sexy stiletto and a bit of bling.

While we would have preferred to see smaller buttons on the jacket (or biker-jacket-style snaps, clasps or just nothing at all), the fit was terrific, and it was thrilling to see Ann work a higher hemline than usual.

We strained to see a tell-tale red sole on the bottoms of those glam kicks, but alas, she was Louboutin-less. Regardless, this look is proof positive that black leather is luxe at any age.

It doesn't take a high-paid pollster to know that the outfit Michelle wore to the Nickelodeon Kids' Choice Awards earlier this year is a loser of a look.

The tunic itself, designed by the hot new Atlanta-born, New York City-based Wes Gordon, was fierce and would have been sensational on someone else. Like a model.

On a mere mortal, however, the fit just wasn't there. Michelle's Helmut Lang foil-washed jeans didn't help the matter. Like the tunic, these skinny-fits were super cool, just not for Michelle - or anyone else that doesn't walk a runway for a living. Not only were they too tight, but the flash bulbs of the cameras amplified the sheen, highlighting the awkward fit of both pieces.

AND THE ELECTION GOES TO ... Alas, we must declare a style stalemate ... until all the final votes are in, of course.