The Reverend Peyton's Big Damn Band: Between the Ditches 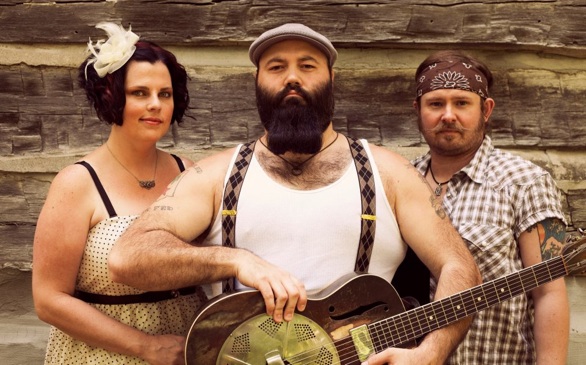 Between the Ditches contains the perfect songs for dancing in the barn.
(Credit: Scott Toepfer)

Listen to Reverend Peyton’s “Something for Nothing,” and you’ll quickly realize that Jack White doesn’t have a monopoly on funking up the stripped-down blues. The song staggers along to a military beat powered by a big bass drum thump and flavored with Peyton’s lucid finger-style slide guitar playing. Then there’s Peyton’s singing style; he’s a burly, bearded man and he kind of looks like a backwoods bootlegger and he sings like it too. “Big Blue Chevy ’72” is an obvious homage to a beloved auto, but Peyton’s gruff delivery makes the song as much a warning as it is a celebration, making it perfectly clear who’s the baddest in these here parts. The attitude is what makes Between the Ditches so much fun; the riffs are essentially the same blues licks that folks like George Thorogood have been recycling and rocking up for decades. But Peyton’s I-don’t-give-a-damn hillbilly-gone-wild persona puts a fresh face on what is essentially rough-and-tumble beer-guzzling music. The Big Damn Band makes sure you can kick up your heels once in awhile too; “Easy Come Easy Go” is particularly suited to rock the barn dance.