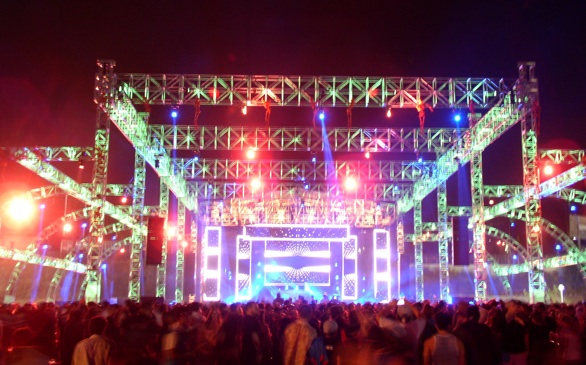 Kill The Noise and Knife Party took over Earstorm stage at HARD Day of the Dead.
(Credit: Josh Herwitt)

When HARD founder Gary Richards made plans to host his fifth Haunted Mansion event this fall, he knew the calendar wasn’t going to do him any favors.

For the Los Angeles-based promoter and DJ who created the music festival series back in 2007, it didn’t help that Halloween landed on a Wednesday.

Still, Richards’ decision to market an event celebrating the Day of the Dead instead — even if it came 24 hours after the Mexican holiday’s official date — didn’t stop many from flooding Los Angeles State Historic Park.

Rather, it gave fans of electronic dance music another reason to party a few days after their Halloween festivities had subsided.

But the sold-out crowd of 35,000 — many of them disguised in face paint and no older than 25 years old — spanning across four stages also served as a reminder of how successful and lucrative the EDM movement remains despite the genre’s increasing homogeneity.

Headlining French duo Justice, who made its fourth appearance at a HARD Haunted Mansion event, wasn’t part of the problem. Its 100-minute, pedal-to-the-metal set to close out the festival felt almost as inspiring as April’s blood-pumping performance at Coachella.

Even hometown up-and-comer Dillon Francis continued to win over EDM fans with large doses of moombahton, trapstep beats and deafening wobble. His latest collaboration with English dubstep producer Flux Pavilion, “I’m The One,” was particularly gripping for those who made their way to the south side of the venue before midnight.

Conversely, the same couldn’t be said for dubstep vet Kill The Noise and newcomer Knife Party over on the sensory-overloaded Earstorm stage, which featured a one-of-a-kind lighting rig that some saw as more of a climbing gym. (Kill The Noise producer Jakob Stanczak had to stop the music several times to remind his audience not to climb the massive structure’s pillars.) Though both artists came into the night with an astonishing amount of hype, neither did enough to distinguish themselves from the rest of the pack.

And scheduling the EDM-blending maestro, Diplo, at the same time as Justice on the opposite end of the field didn’t leave fans with the easiest choice to make. However, those who didn’t catch the Philadelphia-based producer’s solo set did have an opportunity to watch him man the decks for Major Lazer a couple hours earlier.

Some say numbers never lie. If you go by just its attendance figures, Day of the Dead failed to disappoint. Richards, for one, can certainly take pride in the fact that L.A. residents are continuing to show up at HARD events in record numbers year-round.