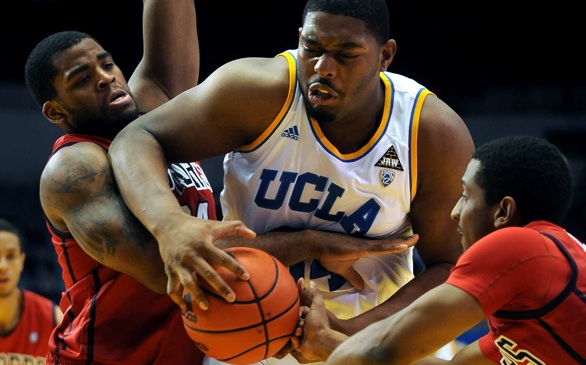 The men’s college basketball season is finally here, and we have already learned many things of the conferences, its teams and players.

Compiled by USA Today/ESPN, the first rankings of the year were released on Oct. 17. Indiana is an obvious lock at No. 1, while Louisville, Kentucky, Ohio State and Michigan close out the top five.
But what about our L.A. teams? Is it too soon to rule out the UCLA Bruins and USC Trojans?

The reality is that anything can happen over the course of the 2012-13 campaign: lackadaisical performances, injuries, eligibility issues and more.

UCLA Bruins
That’s what the Pac-12 and its inhabitants – precisely the locals, UCLA and USC – will be all about this season. An amount of uncertainties still plague several squads, starting with the 13th ranked UCLA Bruins.
UCLA, led by head coach Ben Howland, arguably recruited the best freshman class in the nation: Shabazz Muhammad, Kyle Anderson, Tony Parker and Jordan Adams.

UCLA received a prominent product in Muhammad; he possesses talent like no other. At 6 feet, 6 inches in height and 225 pounds, he holds the ability of playing shooting guard and small forward in distinctive fashion.

Muhammad is a standout scorer, Anderson reportedly provides flashes of Magic Johnson and Parker and Adams ought to be valuable assets coming off the bench – for now.

But everything isn’t looking bright at the moment. Muhammad remains in the mist of an NCAA investigation. If Muhammad is ruled ineligible to play, expect UCLA’s season to still be solid, or a little above that. If he competes, then UCLA could be the most dangerous team on the court against any opponent nationwide. Anderson was under an investigation, too, but the NCAA cleared him to play on Oct. 31.

Even though UCLA’s chances of delivering a championship could depend on the fate of Muhammad, junior Joshua Smith could be the key to success. But he’s had weight and conditioning shape issues, so Smith has some work to do, too.

With these pre-season troubles, UCLA has a lot to do on its route to re-establishing themselves as an elite program. On Nov. 1, they were chosen to finish second in the Pac-12, behind Arizona, by media who covers the conference.

USC Trojans
Whatever good takes place for the USC Trojans on the court will depend on starting point guard and captain Jio Fontan’s health. Fontan tore his ACL in the summer of 2011. If healthy, he’ll be the leader and man running the offense.Despite Fontan’s efforts, USC has a tough schedule ahead. Out of the 31 games, 23 are against teams that captured 20 or more wins during the 2011-12 campaign. Before the arduous Pac-12 action begins, USC faces the competitive likes of Long Beach State, Illinois, San Diego State, Nebraska, New Mexico, Minnesota and Georgia.

As of now, it’s premature to say that head coach Kevin O’Neill is on the hot seat. For some time now, O’Neill hasn’t had a deep squad full of players ready to play, but that’s about to change.

“We are a physical group and we have guys that play really hard,” O’Neill said after the team’s first practice on Oct. 12, according to The Ripsit Blog. “Now, we need to play smart, play together and without fouling…”

USC’s three 7-footers add depth and the 10 players who transferred to the school are looking to bounce back from past difficulties, including friction with coaches and players.

Four of the transfers have Division I pedigree, beginning with J.T. Terrell and Ari Stewart – both played at Wake Forest. The others are Eric Wise (UC Irvine) and Renaldo Woolridge (Tennessee).

Expect USC to at least finish in the middle of the pack, if not higher.

UCLA and USC begin the season on Nov. 9, as each entertains home games against Indiana State and Coppin State, respectively.