The Spatial Series: Indie-Classical at the Hammer 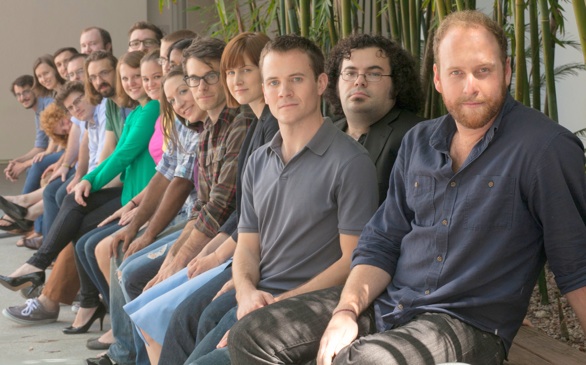 The new vanguard of “indie-classical” is currently in residence at the Hammer Museum, playing a ton of free shows, winning fans and having a blast doing it. L.A.’s own wild Up is proving to be an exciting and important voice in the world of new music.

wild Up is an ambitious group that is interested in providing experiences powerful enough to reshape the way you hear music and sound. A tall order by any measure, wild Up is already proving capable of filling it, especially as it presents its Spatial Music Series at the Hammer through Dec. 8.

According to wild Up director Chris Rountree, “wild Up is an adventurous 24-member chamber orchestra. We’re dedicated to creating emotionally moving music, and we believe in bringing our music to interesting locations.”

The Hammer is a location both interesting and complex; it provides endless fodder for sonic experimentation and contextual reinterpretation -- a fitting locale for the Spatial Music Series.

According to Rountree, “We have a keen interest in the place of music performance… so we’ve made the Spatial Music Series a part of our Hammer residency.”

Generally speaking, a composer who writes spatial music exploits a performance space to create new sonic effect; sound may seem to bounce from one side of the room to the other or change volume suddenly.  The composer invites the listener to experience pure sound.

Kallmyer’s site-specific work, Familiar Architectures, a pastiche of the J.S. Bach cello suites, was presented as part of the Spatial Music Series on Oct. 13 to a small but appreciative crowd, many of whom basked in the glow of sound like so many bathers on a day at the beach.

As luxuriant timbres issued brightly from the instruments of the five cellists presenting Kallmyer’s work, the “familiar architecture” of Bach’s music realized a noticeable warming effect on the Hammer’s chillingly staid post-modern architecture.

Artistic intersection, for instance between music and architecture, is nothing so unusual for a group like wild Up, which is committed to crossing stylistic boundaries in order to produce music people can enjoy.

According to Rountree, “I finished an advanced degree in orchestral conducting a couple of years ago. I was inspired by New York classical groups, many of whom were merging traditional classical music, avant-garde music and pop music. They were basically playing whatever music excited them, regardless of style or category… I thought there were plenty of L.A. musicians who would want to join me in doing something similar, in blurring the lines between new music, classical music and pop.”

Blurring those lines is exactly what the group has been doing. Go to a wild Up show, and you’re equally likely to hear compositions by indie-rock melody-man Andrew Bird, jazz giant Charlie Parker, American populist composer Aaron Copland or baroque wizard Bach.

In wild Up’s playing, you’ll hear bees and bulldozers, silos and skyscrapers; it will give you chills – then it’ll make you chuckle.

In residence at the Hammer Museum until the end of the year, don’t miss your chance to hear wild Up’s unique and eclectic take on new music.