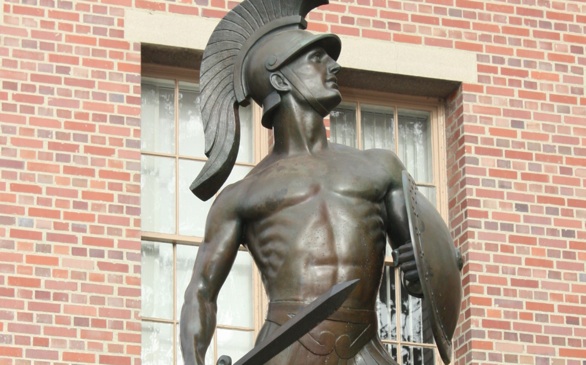 Tommy Trojan is a special target for the UCLA students.
(Credit: Nicki Spencer)

“Two universities, both alike in dignity, in fair Los Angeles where we lay our scene.”

Luckily, the rivalry that exists between USC and UCLA has never caused such a tragedy like the one in “Romeo and Juliet.”

However, the Trojans and the Bruins live in the same city only 12 miles away, which means students cross paths often. Because the schools are close, trash talking amongst students and alumni is a daily ritual.

When asked about her best trash talk line against the Bruins, Laura Welch, a USC senior said, “If you look at recent history and national championships, our record speaks for itself …As far as schools as a whole, when we passed UCLA in the News Week College Rankings, that was a big trash talking point.”

Welch’s best friend from high school, a senior at UCLA named Shan Aggarwal, says, “UCLA ranked higher than SC for the first time in over five years. It looks like Barkley is really going to be regretting his decision from last year.”

Though the two friends are on the two opposing sides of this rivalry, Welch ultimately claims, “I think it’s good we are at rival schools. It really is just all in good fun.”
Over the years, both schools have played some pretty great offense. And I’m not talking about their football teams.

USC’s beloved Tommy Trojan statue has had blue paint splattered all over him and 500 pounds of manure dumped onto him from a helicopter. If that’s not enough, his sword has also been cut many times (and replaced in uncomfortable areas).

But it’s not just Tommy who has gotten hit. In 2010, UCLA students painted their letters on the USC practice field and another year they painted the flagpoles in the Coliseum parking lot blue and gold.

However, the Trojans did not simply watch all of this unfold from the sidelines; they had some substantial jabs against the Bruins.

But the biggest whammy to hit UCLA was in 2009 when USC students covered the Bruin Bear in red and yellow paint, leaving the Bruins with a $20,000 restoration fee.
What is the root of all this madness?

It began in 1939 when the UCLA Alumni Association gave a 295-pound locomotive bell to UCLA’s student body. The bell became known as the Victory bell, a mark of Bruin pride that rang in the stadium whenever they scored a touchdown.

However, the sounds of success were soon muted by a few members of a USC group called the Trojan Knights, an all-male student organization that advertises themselves as the “Guardians of tradition since 1921.” After UCLA won its season-opener against Washington State in 1941, six of the Knights pretended to be UCLA students, loaded the bell into their truck and drove away.

After the heist, the Victory bell remained hidden for more than a year. It was not until after photos of the bell appeared in a USC magazine that the Bruins finally struck back by covering Tommy Trojan with blue paint.

Fed up with the pranking, the president of USC threatened to cancel the football game if the madness continued. Thus, the student body presidents from both schools signed the Victory Bell Agreement of 1942, which stated that the winning team of the USC/UCLA game each year would be the bearer of the bell.

But the problems involving Tommy Trojan, Bruin Bear and other campus landmarks are still happening today. Both schools have taken great precautionary measures to protect their campuses and their pride.

The Facilities Management Systems of USC wraps Tommy Trojan with duct tape to protect him from any harm, while UCLA encases their bear inside a specially designed $5,000 box that is supposedly impossible to open.

One member of the Trojan Knights, a senior named Chris Yoshonis, said that most of the Knights physically guard Tommy Trojan unless they are in class.

“We make a point to be there as much as we can,” he explained. “Every year, pretty much without fail, some UCLA frat sends their pledges over to get a picture with Tommy. But we never get physical; it’s just a shouting match.”

As for any claims that the Knights have pulled pranks on Bruin soil, Yoshonis responds, “I can neither confirm nor deny any accounts.”

All that can be confirmed is that this rivalry will be around for many years to come.