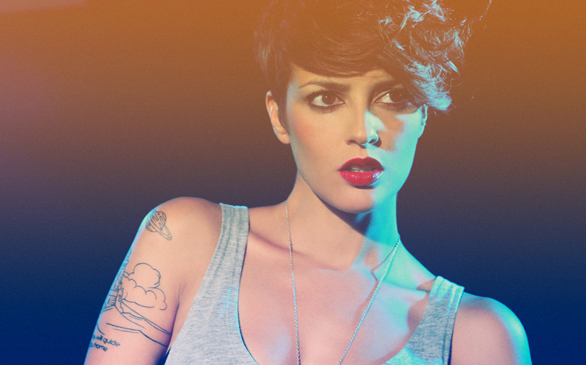 Vega is a singer-songwriter of Spain.

Sometimes we all do and accomplish certain things that are unexpected. Such is the case with singer and songwriter Vega, a 33-year-old music sensation of Spain. Although her interest in music evolved as a child, Vega - born Mercedes Carpio - momentarily settled for collegiate studies in advertising and public relations.

However, she accepted her talent in not only singing, but song writing as well particularly because audiences gave her music a warm reception; they sincerely liked and enjoyed it. Since around 2002, the rest has been history in the making. Vega, who also does acting, sports four records under her repertoire, including India (2003), Circular (2006), Metamorfosis (2009) and her most recent work, La Cuenta Atrás (2011), which received a Latin Grammy nomination for Best Pop/Rock Album.

Despite her busy schedule and preparations to attend the much-awaited Latin Grammy celebrations in Las Vegas, Campus Circle managed to conduct an exclusive phone interview with Vega - who was located in London at the time.

Campus Circle: When and how was it that you discovered your passion for music?

Vega: It began many years ago when I was very little. I started playing guitar when I was about 15 years old. It was one of my father’s guitars, and it was then when I became curious and started to play. As time passed, I began playing in a more formal, professional setting in different venues around my home country. As I observed the public’s positive reaction to my music, I realized that this was my passion and what I wanted to do. In the beginning, I actually got my degree in public relations, and at the time, music was just something to combine with that career. But as time went on, I made the decision to dedicate myself to music exclusively.

CC: What have been your musical influences?  While you were growing up, what did you listen to, and presently, what continues to influence your music?

V: My musical influences have changed very little over the years. I like to characterize myself as someone who likes and listens to all kinds of music. I could name several artists, but if I had to name a few, I would say The Beatles, Brazilian music in general, flamenco, Spanish pop, U2, and especially British music in general.

CC: You are nominated at the upcoming Latin Grammys in the category of Best Pop/Rock Album for your album, La Cuenta Atrás. Tell us how you found out about the nomination and how you feel about it?

V: I found out when my producer, Sebastian Krys, called me to tell me while I was driving. It brought me great joy because it signifies an acknowledgement from the industry of my work. It’s taken 10 years of very hard work leading up to this, involving difficult times finding sponsors and a label to produce my work, which many categorize as being very independent, as well as finding venues in my country to perform, and building up an audience. Because of everything that led up to the nomination, I feel fantastic and very excited. It’s a lovely acknowledgement.

CC: Tell us about your experiences regarding your continued collaboration with Sebastian Krys. How is the work-related relationship with regards to chemistry and connectivity?

V: He’s a friend as well as my producer. We have a very beautiful working relationship in which we have a great mutual respect. I really appreciate how much freedom he gives the artist to express what it is they want to do. He truly understands that the artist IS the creator, the writer. He has a very keen understanding of where the artist wants to go, and what direction the artist wants to take. I feel it’s a luxury to be able to work with him. He’s got great talent, but also makes the artist feel comfortable and respected. And the fact that he’s a friend makes it an even more rewarding experience.

CC: You’ve said you consider yourself a psychologist of sorts, when it comes to the musical profession. That you’ve able to listen to and observe many aspects of what happens in life and the world around you. Can you elaborate on that statement?

V: I didn’t state I saw myself as a psychologist. I said that I do with my songs what a psychologist does. I feel my songs resonate very well with the public, and enables them to have a connection with my songs. Most of my songs are in the 1st person, and they are about things that really have happened to me. So I feel the public can use them as a form of therapy. They allow the public to vent, and keep things in perspective.

CC: You’ve also said this album is an optimistic one. Did you have a specific concept in mind before you began to record your album? In other words, did you have a general theme or message you wanted to convey in your album, or did it just happen on its own?

V: I feel albums are recorded in a natural manner. It’s been my experience that regardless of what ideas you may have before you begin the recording process, things always changes. It’s very difficult to keep any initial ideas you may have intact throughout the process. I write what comes to me naturally and that’s how the songs stay.

CC: You’ve confirmed your attendance for the Latin Grammys in Las Vegas (Nov. 15). How excited are you to go, and enjoy the event and your nomination? Also, is just being nominated a triumph for you?

V: Of course! Going to Las Vegas and celebrating with friends is very exciting. And I feel like a winner just by being nominated; it’s an acknowledgement of my work. I’ve been in L.A. and Miami recording, but I truly feel Las Vegas is an ideal place to celebrate this. It’s the first time I’m nominated, and while I hope it won’t be the last, there’s no sure way of knowing that it will happen again. It will be a lovely reminder of my first Grammy nomination - something that is very significant in the life of any musician, and a unique experience for me.

CC: What’s in your agenda after the Grammys?

V: After the Grammys, I’m scheduled to appear on a television show I will be hosting. It’s a cultural musical show, nothing mainstream. I will also be working on a new album and hopefully release it by next year. Other than that, I plan to spend time and enjoy my family and friends. It’s been about two years since I’ve had the time to truly enjoy their company. In order to write songs, you have to get out and experience as much as you can, and learn as much as you can, so you have something meaningful to write about, and I’ve been very busy doing that.

CC: What message do you have for the youth of the world, who’s so passionate about music in general and would like to follow your footsteps in this industry?

V: I would honestly say that it is fundamental for any aspiring artist to truly believe in their projects. It doesn’t really matter how, or when it comes about. This is a business in which you must be very patient and truly believe in yourself and your work. You must be relentless and truly believe that in the end you will be successful. If you’ve a talent, and base it on hard work and dedication, you are giving yourself a chance to succeed. It’s fine to start small, as long as you are able to build on that. It doesn’t necessarily require vast amounts of money and support from sponsors or record companies. I’ve been doing this for 10 years now, and I have made five albums so far. I definitely had a lot more financial and promotional support with the earlier albums, but I’ve had far more success with the latest ones, which had much less financial or promotional support.  It is important to have a clear vision of what direction you want your career to take, and again, be very patient. Very rarely does success come overnight in this industry. For me personally, it is very important to have the creative freedom that I have. I love being able to write the songs that I want, sing the songs that I want, and do so in the style I want. I would hate to just be part of another industry fad.

CC: Is there anything else you would like to add regarding your career, your future agenda, your album, or your nomination?

V: I would just like to say how delighted I am to have fans like mine - fans who follow me on my social media sites and express their love and affection. I am truly thankful for them, and thankful to have people all over the world listening to my music. An important acknowledgment such as a Grammy nomination is made possible through their support.